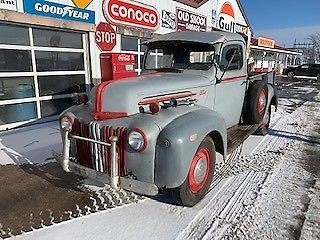 This vehicle is located in:
HAM LAKE, MN

The 1947 Ford line was similar to the short 1946. Visual differences included the removal of the red accents from the grill and the two small lights located just above it. Ford began titling 1947s in February 1947. For the first few weeks, the 1947 model was identical to the 1946. Ford then restyled the body slightly first by moving the parking lights from above the grill to below each headlight. Exterior moldings were changed from grooved to a smooth design. A new hood ornament with a blue plastic insert was installed. A new hubcap design became available in March. The interior dash color was changed from red accent to gold. By September, the roof-mounted antenna was moved to the cowl. Horns were moved to in front of the radiator from the engine compartment. The final 1947 models were titled in November.

• CLEAN TITLE
• ODOMETER SHOWS 62,384 MILES, NO MILES ON THE TITLE BECAUSE IT'S OVER 10 YEARS
• V8 ENGINE WITH MANUAL TRANSMISSION
• DRIVEN LAST SUMMER IN THE LOCAL PARADE
• COMES WITH OPERATOR'S MANUAL
• NOW NOT RUNNING DUE TO SITTING FOR A FEW MONTHS
• WILL NOT TAKE MUCH TO GET IT BACK ON THE ROAD