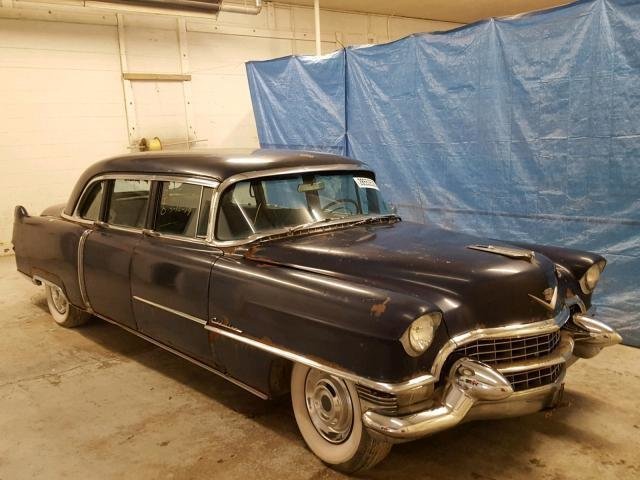 This car is located in:
ELLWOOD CITY, PA

In 1955 the grille was redesigned with wider spaces between the blades and the parking lamps were repositioned beneath directly below the headlights. The trim of the Series 75 long wheelbase model was distinctive from other lines. A horizontal rub molding ran from the front parking light housings to the trailing edge of the front door and stopped. A full length vertical air slot-style fenderbreak molding was placed directly behind the rear gap of the back doors. The two moldings did not meet at right angles. A Fleetwood script appeared on the rear deck lid. The high headroom appearance was seen again. Both the sedan and the limousine continued to feature auxiliary seats for extra passenger carrying capacity and the Imperial limousine had a hydraulically operated glass driver's partition. Engine output was increased to 250 hp (186 kW). An optional dual-four barrel carb setup boasted 270 hp (201 kW). Hydramatic automatic transmission was now standard equipment.

• CLEAN TITLE, ODOMETER SHOWS ACTUAL 67,215 MILES, THE TITLE ALSO SHOWS ACTUAL MILEAGE
• 331 V8 4 BARREL ENGINE WITH AUTOMATIC TRANSMISSION
• VERY COMPLETE CAR
• THE BODY IS VERY SOLID
• THE FACTORY BAT WING AIR CLEANER IS EVEN IN PLACE
• POWER WINDOWS
• ONLY 1075 OF 1955 CADILLAC LIMOS WERE MADE
• THE SAME CAR THAT ELVIS HAD BACK IN THE DAY (NOT HIS CAR, JUST LIKE IT)