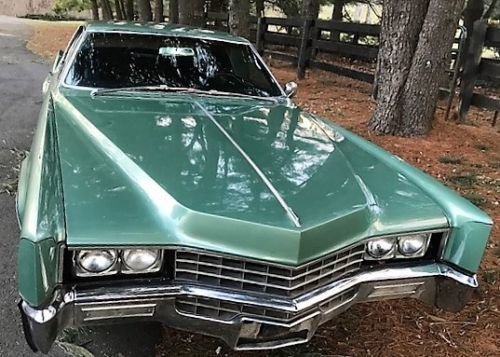 This car is located in:
WALDORF, MD

The Eldorado was radically redesigned in 1967 to capitalize on the era's burgeoning personal luxury car market. Promoted as a "personal" Cadillac, it shared the E-body with the second-generation Buick Riviera and the Oldsmobile Toronado, which had been introduced the previous year. To enhance its distinctiveness, Cadillac adopted the Toronado's front-wheel drive Unified Powerplant Package, adapted to a standard Cadillac 429 V8 coupled to a Turbo-Hydramatic 425 automatic transmission. Based on the Turbo-Hydramatic 400, the THM425 placed the torque converter next to the planetary gearbox, which it drove through a metal, motorcycle-style roller chain. Disc brakes were optional, and new standard safety equipment included an energy absorbing steering column and generously padded instrument panel. The Unified Powerplant Package was later shared with the GMC Motorhome starting in 1972.

The new Eldorado was a great departure from the previous generation, which had become little more than a dressed-up version of Cadillac's De Ville. Its crisp styling, initiated by GM styling chief Bill Mitchell, was distinctive and unique, more angular than the streamlined Riviera and Toronado. This was the only production Cadillac to be equipped with concealed headlights behind vacuum operated doors.

Performance was 0–60 mph (0–96 km/h) in less than nine seconds and a top speed of 120 mph (192 km/h). Roadability and handling were highly praised by contemporaneous reviews, and sales were excellent despite high list prices. Its sales of 17,930 units, nearly three times the previous Eldorado high, helped give Cadillac its best year ever.

• CLEAN TITLE, THE ODOMETER SHOWS ACTUAL 95,554 MILES, THE TITLE ALSO SHOWS ACTUAL MILEAGE, COMES WITH BOOKS AND RECEIPTS
• 429 CUBIC INCH V8 WELL RUNNING ENGINE WITH GLIDE-O-MATIC AUTOMATIC TRANSMISSION
• POWER ANTENNAE, CRUISE CONTROL, POWER WINDOWS, POWER SEATS
• BODY IS IN GREAT SHAPE WITH NO DENTS OR RUST
• BLACK LEATHER INTERIOR IS IN A NICE CONDITION, AS IS BLACK CARPETING
• POWER OPTIONS ALL WORK, INCLUDING ELECTRIC WINDOWS AND POWER ANTENNAE
• THE ORIGINAL AM/FM RADIO IS IN DASH, AND THERE IS AN AFTERMARKET KENWOOD AM/FM/CD PLAYER MOUNTED UNDER DASH WITH A 10 DISK CD CHANGER AND POWER BOOSTER AMP IN TRUNK
• UNDERCARRIAGE IS PRETTY CLEAN AND RUST FREE, HAS NEWER DUAL STAINLESS STEEL EXHAUST
• AIR CONDITIONING COMPRESSOR WAS REMOVED TO INSTALL A NEW WATER PUMP AND WASN'T PUT BACK ON, BUT IT COMES WITH THE VEHICLE
• THE CAR STARTS RIGHT UP, WITH A LITTLE TLC WILL BE A GREAT DRIVER