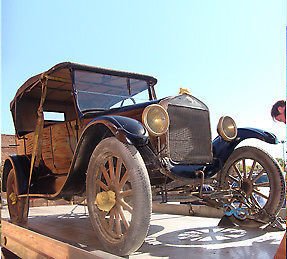 This vehicle is located in:
LOUISVILLE, KY

• CLEAN TITLE, THIS CAR WAS IMPORTED FROM ARGENTINA, HAS A NY STATE REGISTRATION DOCUMENT, FOR OLD CARS PRIOR TO 1973 NY STATE ISSUES A TRANSFERABLE REGISTRATION, SAME AS THE TITLE; YOU CAN REGISTER AND GET A TITLE IN YOUR STATE
• VERY SOLID CAR AND ALWAYS GARAGE KEPT
• VERY ORIGINAL CAR
• THE CAR DOES NOT HAVE AN ODOMETER, SO THE MILEAGE IS UNKNOWN
• NICE INTERIOR
• NOW NOT RUNNING DUE TO SITTING FOR A FEW YEARS, WILL NEED SOME TUNE UP TO GET IT RUNNING