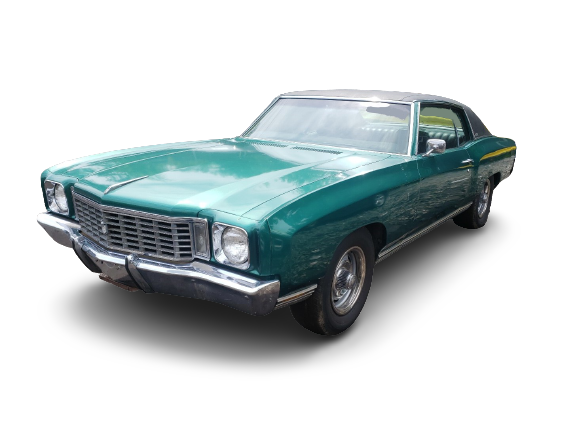 THIS 1972 CHEVROLET MONTE CARLO NOTCH BACK HARDTOP COUPE IS LOCATED IN: WALDORF, MD 20602

The Chevrolet Monte Carlo is a two-door coupe that was manufactured and marketed by the Chevrolet division of General Motors. Deriving its name from the namesake Monegasque city, the Monte Carlo was marketed as the first personal luxury car of the Chevrolet brand. Introduced for the 1970 model year, the model line was produced across six generations through the 2007 model year, with a hiatus from 1989-1994. The Monte Carlo was a closely aligned variant of the Pontiac Grand Prix through its entire production.

From 1970 to 1972, the Monte Carlo used the "A-Special" platform with the Grand Prix, shifting to the A-body intermediate chassis for 1973-1977. For 1978, the model line underwent extensive downsizing; a major revision saw the A-body chassis redesignated as the G-body for 1981. After an abbreviated 1988 model year, the Monte Carlo was replaced by the two-door Chevrolet Lumina.

A Cadillac-like egg-crate grille similar to the 1971 Chevrolet Caprice, rectangular front parking lamps moved to the left and right edges of the grille, a wider hood spear without stand-up ornament, and a metal rear trim molding highlighted the changes to the 1972 Monte Carlo, the final year for the first-generation design. The SS was dropped, but a new Monte Carlo Custom option appeared as a one-year only offering that included a special suspension and other items previously included with the SS option. Unlike the departed SS package, it was available with any engine on the roster. The Monte Carlo Custom badging was similar to the Impala Custom.

The engines were largely unchanged, but an industry-wide switch to SAE net hp numbers led to a reduction in the rated power of all Chevrolet engines. Chevrolet did not list gross horsepower figures for 1972. Compared to 1971 figures, only the 402 and 454 had a decrease in power.

In California, which had emissions standards more stringent than federal law, the 4-barrel carbureted 350 was the standard and only available engine. Also, the only transmission offered in California was the Turbo Hydramatic.

For 1972, the four-speed manual transmission was discontinued from the option list as a line in the Monte Carlo brochure describing its market position as a personal luxury car stated "Sorry, no four-on-the-floor." The standard three-speed manual and optional two-speed Powerglide automatic transmissions were offered only with the base 350 CID two-barrel engine, with the three-speed Turbo Hydramatic also available with this engine and a mandatory option with each of the optional engines.

Mechanically, the most significant change was that variable-ratio power steering became standard equipment for the first time.

Interior trim was relatively unchanged from 1971 other than the availability of all-vinyl upholstery with the standard bench seat in addition to the optional Strato bucket seats. Cloth interiors were also offered with both bench and bucket seats. The 1972 model year's production increased to 180,819 to set a new record in the final year for the first-generation A-body. Monte Carlo and other Chevrolet models were promoted as part of a new ad campaign in which Chevys in print and broadcast ads were featured at various tourist attractions and sites around the United States under the tagline "Chevrolet: Building a Better Way To See The USA."