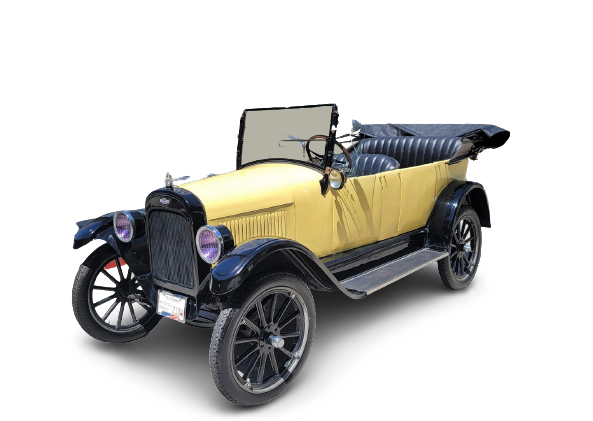 The Chevrolet Superior Series F was launched in 1923, manufactured by Chevrolet for four years with a different series per year. The 1923 model was known as the Series B, the 1924 model was the Series F, for 1925 it was known as the Series K and the 1926 Superior was known as the Series V. It was replaced in 1927 by the Series AA Capitol. It was the first Chevrolet that didn't have a larger companion model and was the only car sold by Chevrolet in several body style configurations all supplied by Fisher Body. Each year new mechanical changes, appearance updates or optional features that became standard in subsequent years became expected of all GM products including Chevrolet. Body styles were separated into open and closed which meant closed included retractable glass in the doors and glass surrounding rear seat passengers. Standard items included tools, a jack for tire removal, speedometer, outside lockable door handles, ammeter, oil pressure gauge, dashboard light, choke pull knob, electric horn, ignition theft lock, and a two piece vertical ventilating windshield that allowed fresh air to enter the passenger compartment. Wheels were 30" and came standard with hickory wood spokes or optional pressed steel discs. For 1925, bumpers were offered optionally along with outside side view mirrors, heater for passenger compartment and a clock.

CLEAN TITLE IN HAND
ALL ORIGINAL 1923 CHEVY
4 CYL ENGINE WITH MANUAL TRANSMISSION
THIS BEAUTY HAS BEEN IN THE SAME FAMILY FOR 3 GENERATIONS
COMES WITH RECEIPTS AND PAPERWORK DATING BACK TO THE 1960S
ALL MAINTENANCE AND REPAIRS ON THIS VEHICLE WAS DONE BY THE PREVIOUS OWNER
RUNS AND DRIVES GREAT
NO MECHANICAL ISSUES
THE CAR WAS ORIGINALLY USED AND RESTORED BY THE FILM INDUSTRY, SINCE THEN IT HAS BEEN DRIVEN IN CAR SHOWS AND STORED INSIDE