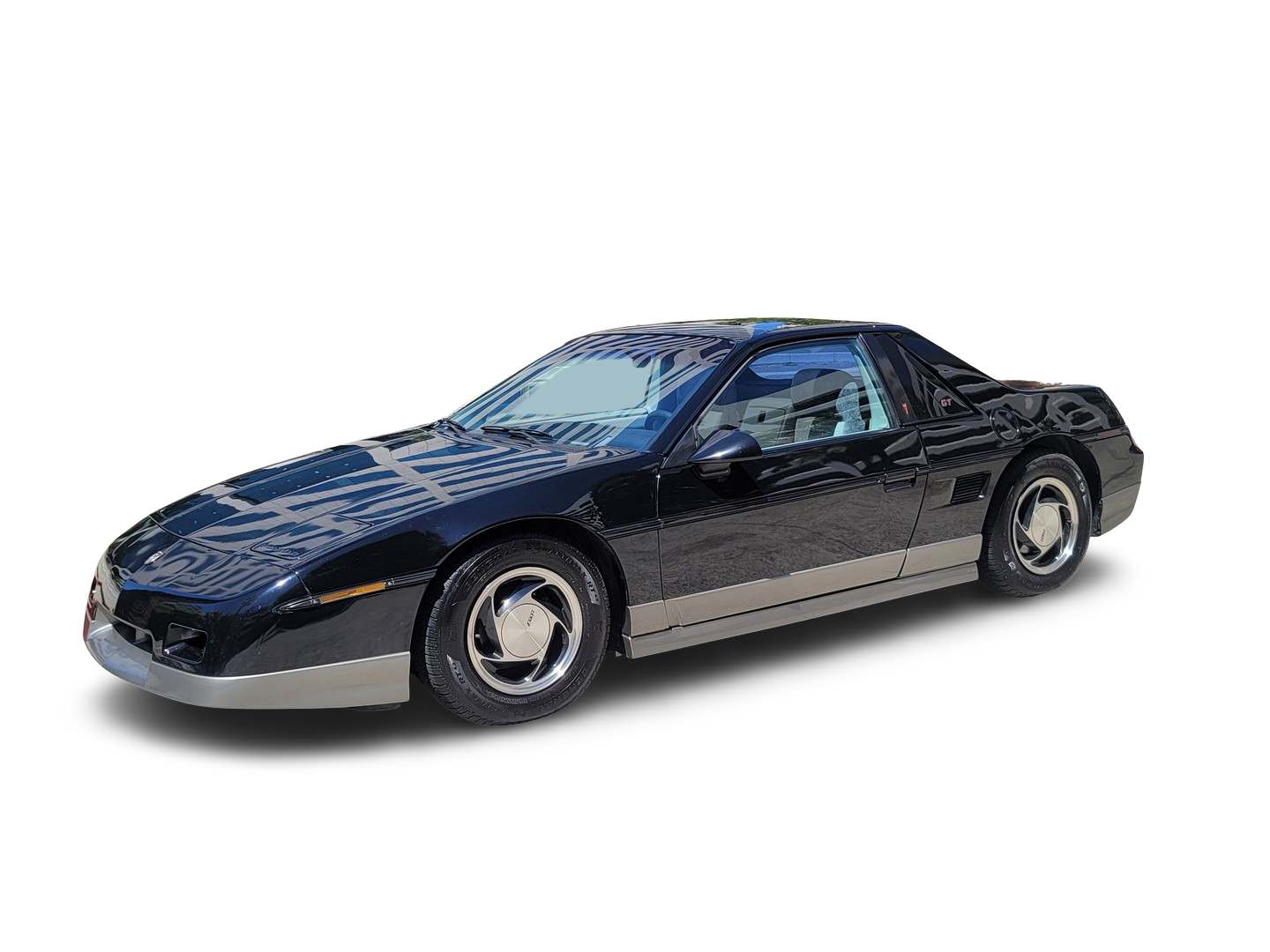 The Pontiac Fiero is a mid-engine sports car that was built by American automobile manufacturer General Motors from 1983 to 1988 for the 1984 to 1988 model years. The Fiero was designed by George Milidrag and Hulki Aldikacti as a sports car. It was the first two-seater Pontiac since the 1926 to 1938 coupes, and the first mass-produced mid-engine sports car by an American manufacturer. Many technologies incorporated in the Fiero design, such as composite panels, were radical for their time. Other features included hidden headlamps and, initially, integrated stereo speakers in the driver and passenger headrests. Despite the innovations, the model was discontinued by General Motors after annual sales fell steadily. The safety reputation was bad because of explosive fires and multiple recalls. Worse, the car was a money loser—General Motors lost about $2000 for every Fiero it built.

The Fiero began production in August 1983. In an effort to sell the car as economically sensible, GM equipped and sold the Fiero as a commuter car; although the marketing build-up leading to initial release indicated anything but a regular commuter. The car also proved uncomfortable for some drivers because of the lack of power steering.

At the beginning of production the Fiero was only available in Red (M71) and White (M40) colors with Black (M41) and Light Gray Metallic (M14) introduced later, the paint shop was only able to handle four different colors at a time. All 1984 models came with the same 2.5 L I4.

Although sales literature listed only two models available in 1984, there were at least three models available with different optional packages. There was the Fiero Coupe, the Sport Coupe and the SE. The Fiero Coupe, also called "Fuel Economy Leader", came with the MY-8 4-speed manual transaxle that had a 0.73 overdrive top gear along with a high mpg 3.32:1 axle ratio. This gave it an EPA highway/city rating of 50/31 mpg. Air conditioning and automatic transaxle could not be ordered. The starting price for the Fiero Coupe was $7,999. The Fiero Sport Coupe, also referred to as the "base car", came with the M-19 four-speed manual with a 0.81 top gear along with 4.10:1 differential, giving it better acceleration at the cost of fuel economy, 42/26 mpg. An automatic 3-speed transmission, MD-9 Hydramatic 125-C, was available along with A/C. The starting price was $8,499 for the Sport Coupe. The top model was the Fiero SE, starting at $9,599, it included the WS-6 handling package along with other trim upgrades.

CLEAN TITLE IN HAND
CLEAN CARFAX
LOW 11,169 MILES
EQUIPPED WITH A 2.8L V6 ENGINE, AND A 4 SPEED MANUAL TRANSMISSION
THIS 1985 PONTIAC FIERO GT IS IN EXCELLENT CONDITION INSIDE AND OUT
THE VEHICLE IS GARAGE KEPT YEAR ROUND AND THERE ARE NO DENTS, SCRATCHES, OR RUST ON THE EXTERIOR
THE UNDER-BODY IS CLEAN AS WELL
THE INTERIOR IS LIKE NEW - NO STAINS OR TEARS IN THE CLOTH SEATS
ALL INTERIOR ELECTRONICS WORK - RADIO, CASSETTE PLAYER, ETC
THE CAR HAS A GLASS SUNROOF THAT CAN BE OPENED, OR REMOVED ENTIRELY AND STORED UNDER THE HOOD IF DESIRED
THE GLASS SUNROOF PANEL IS IN GREAT SHAPE - NO CHIPS, CRACKS, OR LEAKS
ALL FOUR TIRES HAVE BEEN RECENTLY REPLACED
OPTION ON THIS GREAT EXAMPLE OF A 1985 PONTIAC FIERO GT ARE: AM/FM RADIO, CASSETTE, POWER WIDOWS, POWER BRAKES, POWER MIRRORS, MANUAL SUNROOF, SEAT BELTS, CLOTH INTERIOR, SPARE TIRE, JACK, AND ALUMINUM/ALLOY WHEELS
IT'S NOT EVERY DAY YOU SEE A VEHICLE KEPT IN THIS TYPE OF CONDITION, DON'T LET THIS OPPORTUNITY PASS YOU BY