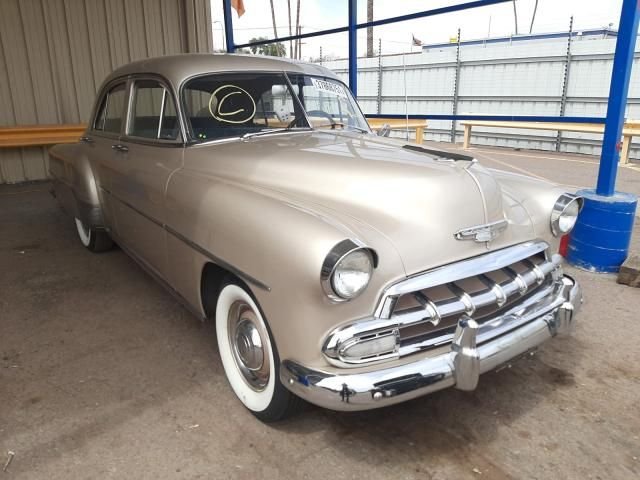 The Chevrolet Deluxe was a trim line of Chevrolet automobiles, marketed from 1941 to 1952, and was the volume sales leader for the market during the 1940s. The line included at first a 4-door sedan, but grew to include a fastback 2-door "aerosedan" and other body styles. The 1941 Chevrolet was the first generation that didn't share a common appearance with Chevrolet trucks, while the Chevrolet AK Series truck did share common internal components.

The original series ran from 1941 to 1948, after which a new body style was introduced for 1949, running through 1952. During the post-war years and continuing through the early 1950s, the Deluxe range was Chevrolet's sales leader, offering a balance of style and luxury appointments unavailable in the base Special series; and a wider range of body styles, including a convertible, Sport Coupe hardtop (starting in 1950), two- and four-door sedans and four-door station wagons.

In 1949, all the Chevrolets got the first new styling after the war. The Deluxe was the brand new upper-end model for Chevrolet. The cheapest Deluxe was the Deluxe Styleline 6-passenger sedan, costing $1,492. Brakes were 11-inch drums. It had full instrumentation. The front suspension had stabilizers.

Many things changed starting in 1950, starting with a luxuriously-appointed hardtop coupe, called the Bel Air. The new Bel Air including upgraded cord and leather-grain vinyl trim (available in a choice of several two-tone schemes), full carpeting and other appointments not available in even the Deluxe series, and a wide range of two-tone paint schemes. The 1950-1952 Bel Airs—during these early years, the Bel Air was officially part of the Deluxe range—shared only their front sheetmetal ahead of the A-pillar with the rest of the range. The windshield, doors, glass, and trunk were common with the Styleline convertible, but the roof, rear quarters and rear windows were unique.

The other change was the availability of Powerglide, a two-speed automatic transmission, exclusively in the Deluxe and Bel Air models. It was powered by a 235-cubic inch six-cylinder engine developing 105 horsepower and had a 3.55:1 rear differential; the engine went on to become the "Blue Flame six." Models sold with the standard three-speed manual transmission got the usual 216.5-cubic inch engine, developing 92 horsepower.

Throughout the post-war years, many comfort, convenience and styling options were available, including tinted glass which was introduced in 1952, the final year for this style. Popular Mechanics rated fuel economy of 20mpg at 50 mph. After the end of the 1952 model year, the old nameplates—Special and Deluxe—were retired, and changed to 150 and 210, respectively, with trim similar to their respective former series. The Bel Air model became a full series, including two- and four-door sedans, station wagon and convertible; and represented the top-end model with features similar to the 1950-1952 models (luxury interior, full carpeting and other features).