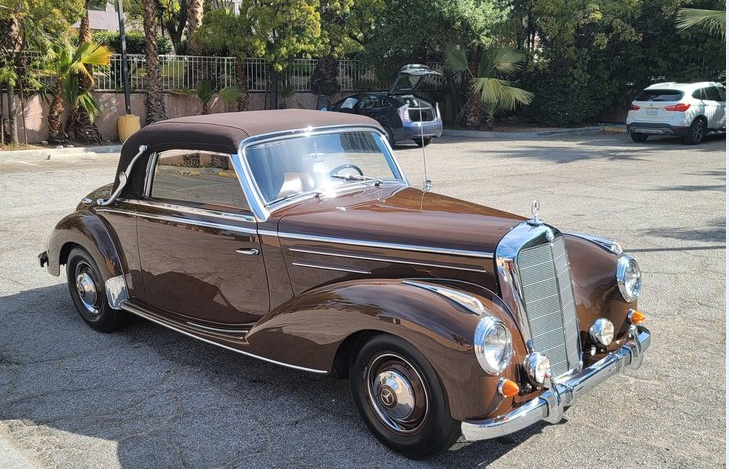 The Mercedes-Benz W187 is a luxury car produced by Mercedes-Benz from 1951 to 1955. Introduced at the Frankfurt Motor Show in April 1951, the W187 was powered by a single overhead camshaft inline six-cylinder M180 engine and available as a saloon, coupé, and cabriolet, all designated with the 220 model name.

The styling was similar to that of the Mercedes-Benz 170S except that the 170's freestanding headlights were for the 220 integrated into the fenders for a slightly more modern look. Two different cabriolet models were built, conceived as exclusive sporting cars of exclusive character, but these only sold 1,278 and 997 for the "A" (2-door, 2/3-seat) and "B" (2-door, 4-seat) versions, respectively.

In December 1953, just as the saloon and cabriolet "B" models were about to be replaced, a "Cabriolet A" derived W187 Coupé was announced for 1954. The Mercedes-Benz sales department let it be known that this development was a direct response to pressing requests from leading celebrities of the time.[citation needed] During 1953 the manufacturer replaced the conventionally flat windscreen on the 2/3 seater "Cabriolet A" with a slightly curved screen, which also found its way on to the new coupé: this was a way of highlighting the sporting nature of both models.[citation needed] Nevertheless, the coupé once fitted, as many were, with a steel sunroof, was at the end of 1953 offered for 22,000 Marks which was nearly twice the price for the standard W187 "Limousine", and only 85 of the W187 coupés were actually sold.