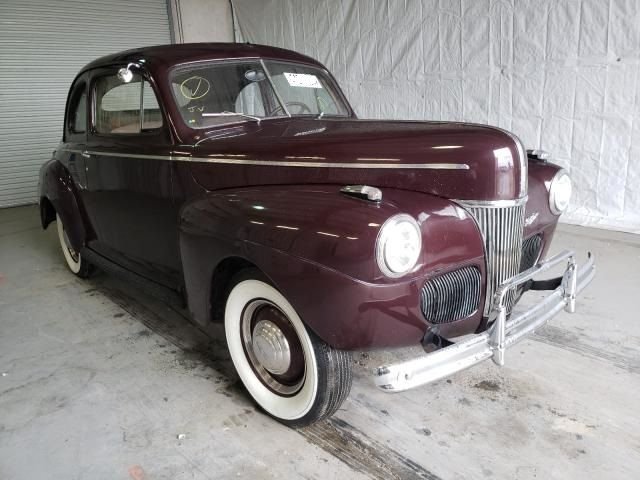 The Ford car was thoroughly updated in 1941, in preparation for a time of unpredictability surrounding World War II. The 1941 design would continue in an aborted 1942 model year and would be restarted in 1946 and produced until 1948 when the more modern 1949 Fords were ready. During the initial year of this car, it evolved considerably. The front fenders came in three pieces, the theory being that small damages could be replaced easily. During the year, it evolved into two pieces with the lower front and back sections being joined. The hood risers changed, the early ones being the same as 1940 Fords, changing during the year to the better later version. The 1941 Convertible had no rear side windows, the only side windows being in the doors; in 1942, quarter windows were added so the rear occupants could see out. Five different coil/distributor arrangements were used during 1941, causing confusion for mechanics. Other variations were: two different positions for the generator, and three for the cooling fan — front of the crankshaft, front of the generator (rare) and on a bracket. This is thought to be the first Ford to offer a replaceable cartridge oil filter as an option. The two interior heaters were a "Southwind" gasoline burner, which had the advantage of keeping one warm in winter at drive-in movies (provided a small electric fuel pump was used), and a more ordinary hot-water type. Both had window defrosters. It had an excellent radio, which could consume the battery in about two hours. Electric windshield wipers were available in addition to the vacuum-powered wipers. Three different convertible power top mechanisms (vacuum, electric screw, and hydraulic) and two different header bar latching systems were used. Rear suspensions sometimes had a sway bar, most did not. It had excellent brakes and among the best handling of ordinary cars of the time. It served a transitional role in Ford's lineup.

Fords for 1941 were much more modern with a wide body that nearly covered the running boards. The front and rear fenders were still pronounced, but were now integrated more into the body and the headlights were pushed all the way up and out over the front wheels. The 1941 grille was a three-part affair with a tall center section bookended by twin kidneys low on the fenders and vertical bars all around. The 1941 was a bigger car with a 194.3-in (4.935-m) overall length and a width increased to 73.12-in. Body styles included two-door and four-door sedans, a sedan coupe, a business coupe, and convertible coupe, sedan delivery wagon, and woody station wagon. The Super Deluxe had several amenities of higher quality over the base models, including more chrome, leather seats, and a wood-grain dashboard. The pickup truck continued with the 1940 standard Ford styling. Production of the 1941 models was disrupted by a sudden labor strike in April 1941; Henry Ford, having resisted unionization well after the rest of the American automobile industry accepted it, finally gave in and signed a contract with the UAW.