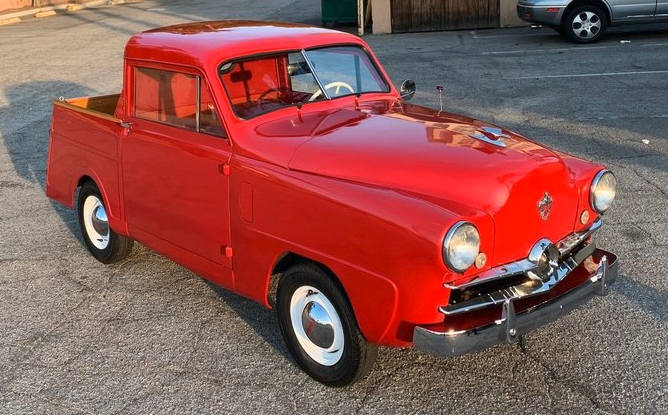 Crosley was a small, independent American manufacturer of subcompact cars, bordering on microcars. At first called the Crosley Corporation and later Crosley Motors Incorporated, the Cincinnati, Ohio, firm was active from 1939 to 1952, interrupted by World War II production. Their station wagons were the most popular model, but also offered were sedans, pickups, convertibles, a sports car, and even a tiny jeep-like vehicle. For export, the cars were badged Crosmobile.

Crosley introduced several "firsts" in American automotive history, including the first affordable, mass-market car with an overhead camshaft engine in 1946; the first use of the term 'Sport(s-) Utility' in 1947, for a 1948 model year convertible wagon; and the first American cars to be fitted with 4-wheel caliper type disc brakes, as well as America's first post-war sports car, the Hotshot, in the 1949 model year.

In 1948 Crosley replaced the CC with the 1949 model year CD. Front and rear bodywork were redesigned on the sedan / coupe and convertible, though rear bodywork on the station wagon and pickup remained largely unaltered. A significant change was fitting the cast-iron block CIBA engine instead of the stamped-steel CoBra engines, that were lighter, but required more maintenance, or else would yield reliability problems.

For 1949 and 50 there were standard and Deluxe models. The '49 model year still had sliding glass side windows in the doors, but from the 1950 model year, roll-down windows and electric wipers were offered. For 1951 and 1952 the front was again redone; the Deluxe model replaced the standard model as the bottom of the range, and 'Super' models were introduced as the new top of the line.