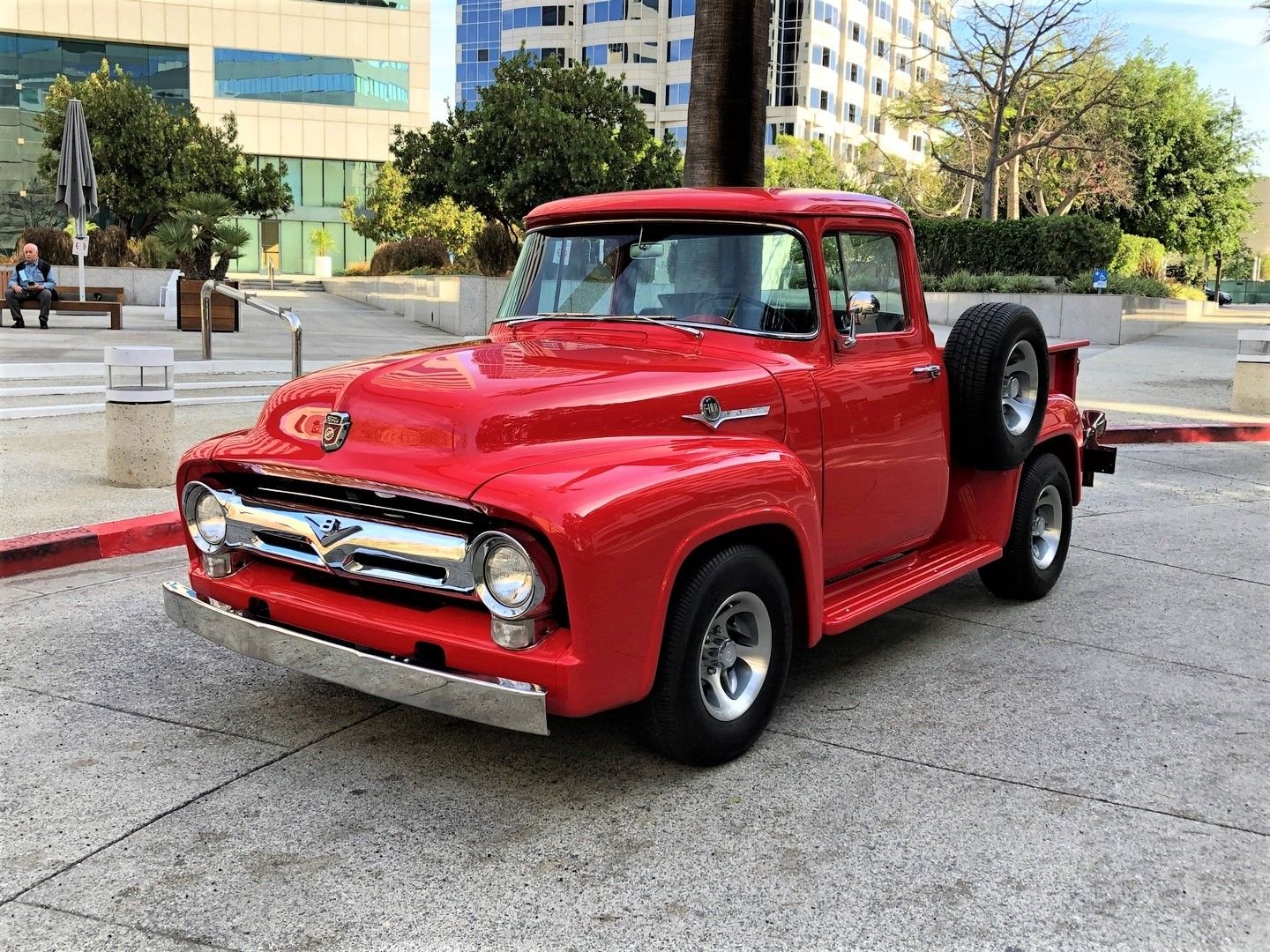 The Ford F-Series is a series of light-duty trucks and medium-duty trucks (Class 2-7) that have been marketed and manufactured by Ford Motor Company since 1948. While most variants of the F-Series trucks are full-size pickup trucks, the F-Series also includes chassis cab trucks and commercial vehicles. The Ford F-Series has been the best-selling vehicle in the United States since 1981 and the best-selling pickup since 1977. It is also the best selling vehicle in Canada.
Second generation (1953–1956)
For the 1953 model year, an all-new version of the F-Series made its debut. Increased dimensions, improved engines, and an updated chassis were features of the second generation.
Additionally, a change to the F-Series naming scheme would remain in place to the present day. The half-ton F-1 became the F-100 (partially influenced by the North American F-100 Super Sabre); the F-2 and F-3 were combined into the F-250 while the F-4 became the F-350. Conventional F-Series trucks were F-500 to F-900; COE chassis were C-Series trucks.

THE TRUCK IS FINISHED IN RED OVER A BLACK INTERIOR, AND POWER IS FROM A 272CI V8 DRIVING THE REAR WHEELS THROUGH A COLUMN-SHIFTED THREE-SPEED MANUAL TRANSMISSION. ADDITIONAL EQUIPMENT INCLUDES POWER-ASSISTED FRONT DISC BRAKES, A CHROME GRILLE AND BUMPERS, AFTERMARKET ALLOY WHEELS, AND A REFINISHED WOOD CARGO FLOOR. THE BODY WAS STRIPPED BEFORE A REPAINT IN ITS CURRENT RED
DETAILS INCLUDE BODY-COLORED RUNNING BOARDS, CHROME FRONT AND REAR BUMPERS, WOOD BED FLOOR SLATS SEPARATED BY POLISHED STAINLESS STEEL RUNNERS, AND DUAL FORD-LOGO TAIL LIGHTS.
AMERICAN RACING 15″ ALLOY WHEELS WEAR 255/70 GOODYEAR WINGFOOT TIRES, WITH A MATCHING SPARE MOUNTED ON THE LEFT SIDE OF THE BED. THE POWER-ASSISTED BRAKING SYSTEM FEATURES FRONT DISC BRAKES AS WELL AS AN UNDER-MOUNTED BOOSTER AND DUAL-CIRCUIT MASTER CYLINDER.
THE CAB FEATURES A BENCH SEAT TRIMMED IN BLACK LEATHER ALONG WITH A MATCHING HEADLINER, DOOR PANELS, AND CARPETS. AMENITIES INCLUDE LAP BELTS, AN AFTERMARKET TURN SIGNAL SWITCH, AND A HEATER.
INSTRUMENTATION CONSISTS OF A 90-MPH SPEEDOMETER AND GAUGES FOR COOLANT TEMPERATURE AND FUEL LEVEL AS WELL AS OIL PRESSURE AND GENERATOR WARNING LIGHTS
THIS 1956 FORD F-100 RUNS AND DRIVES AS GOOD AS IT LOOKS