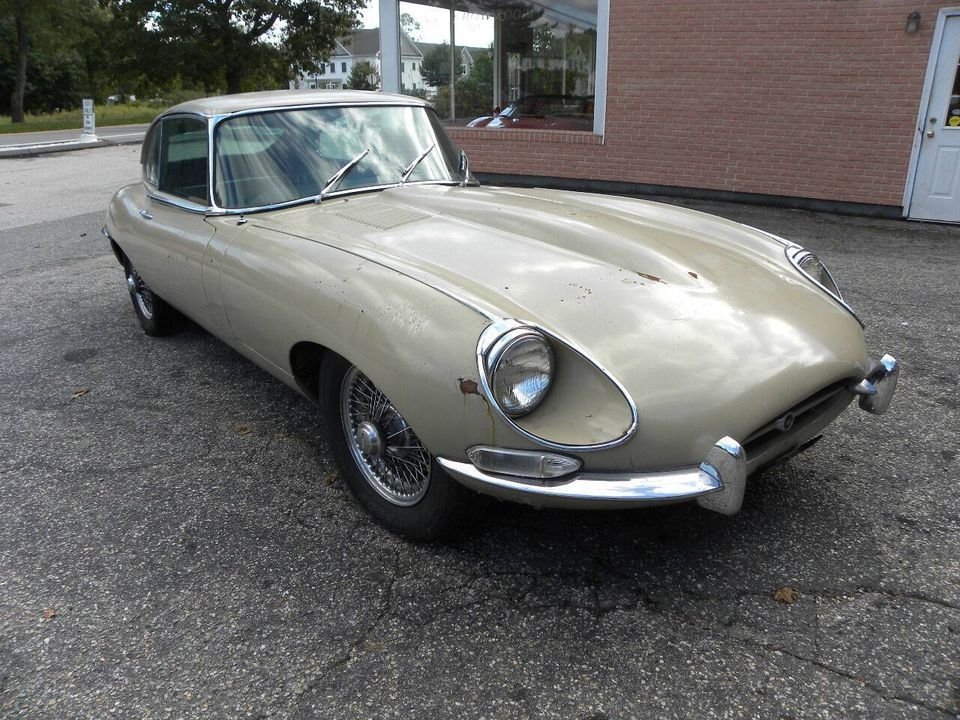 The Jaguar E-Type, or the Jaguar XK-E for the North American market, is a British sports car that was manufactured by Jaguar Cars Ltd between 1961 and 1975. Its combination of beauty, high performance, and competitive pricing established the model as an icon of the motoring world. The E-Type's claimed 150 mph (241 km/h) top speed, sub-7-second 0 to 60 mph (97 km/h) acceleration, unitary construction, disc brakes, rack-and-pinion steering, and independent front and rear suspension distinguished the car and spurred industry-wide changes. The E-Type was based on Jaguar's D-Type racing car designed by William Heynes, which had won the 24 Hours of Le Mans three consecutive years beginning 1955, and employed what was, for the early 1960s, a novel racing design principle, with a front subframe carrying the engine, front suspension and front bodywork bolted directly to the body tub. No ladder frame chassis, as was common at the time, was needed and as such the first cars weighed only 1315 kg (2900 lb).

On its release on 15 March 1961 Enzo Ferrari called it "the most beautiful car ever made". In 2004, Sports Car International magazine placed the E-Type at number one on their list of Top Sports Cars of the 1960s. In March 2008, the Jaguar E-Type ranked first in The Daily Telegraph online list of the world's "100 most beautiful cars" of all time. Outside automotive circles, the E-type received prominent placement in Diabolik comic series, Austin Powers films and the television series Mad Men.

The Series 1 was introduced, initially for export only, in March 1961. The domestic market launch came four months later in July 1961. The cars at this time used the triple SU carburetted 3.8-litre six-cylinder Jaguar XK6 engine from the XK150S. Earlier built cars utilised external bonnet latches which required a tool to open and had a flat floor design. These cars are rare and more valuable. After that, the floors were dished to provide more leg room and the twin bonnet latches moved to inside the car. The 3.8-litre engine was increased to 4.2 litres (4,235 cc) in October 1964.

A 2+2 version of the fastback coupé was added in 1966. The 2+2 offered the option of an automatic transmission. The body is 9 in (229 mm) longer and the roof angles are different. The roadster and the non 2+2 FHC (Fixed Head Coupé) remained as two-seaters.

• CLEAN AND CLEAR NY STATE TRANSFERABLE REGISTRATION, FOR OLD CARS PRIOR TO 1973 NY STATE ISSUES A TRANSFERABLE REGISTRATION, SAME AS THE TITLE; YOU CAN REGISTER AND GET A TITLE IN YOUR STATE
• THIS JAGUAR E-TYPE HAS 66,460 MILES
• VERY COMPLETE AND ORIGINAL CAR
• TAN EXTERIOR WITH BLACK INTERIOR
• INLINE 6 CYL. ENGINE
• AUTOMATIC TRANSMISSION
• WELL MAINTAINED, GARAGE KEPT
• RUNS AND DRIVES