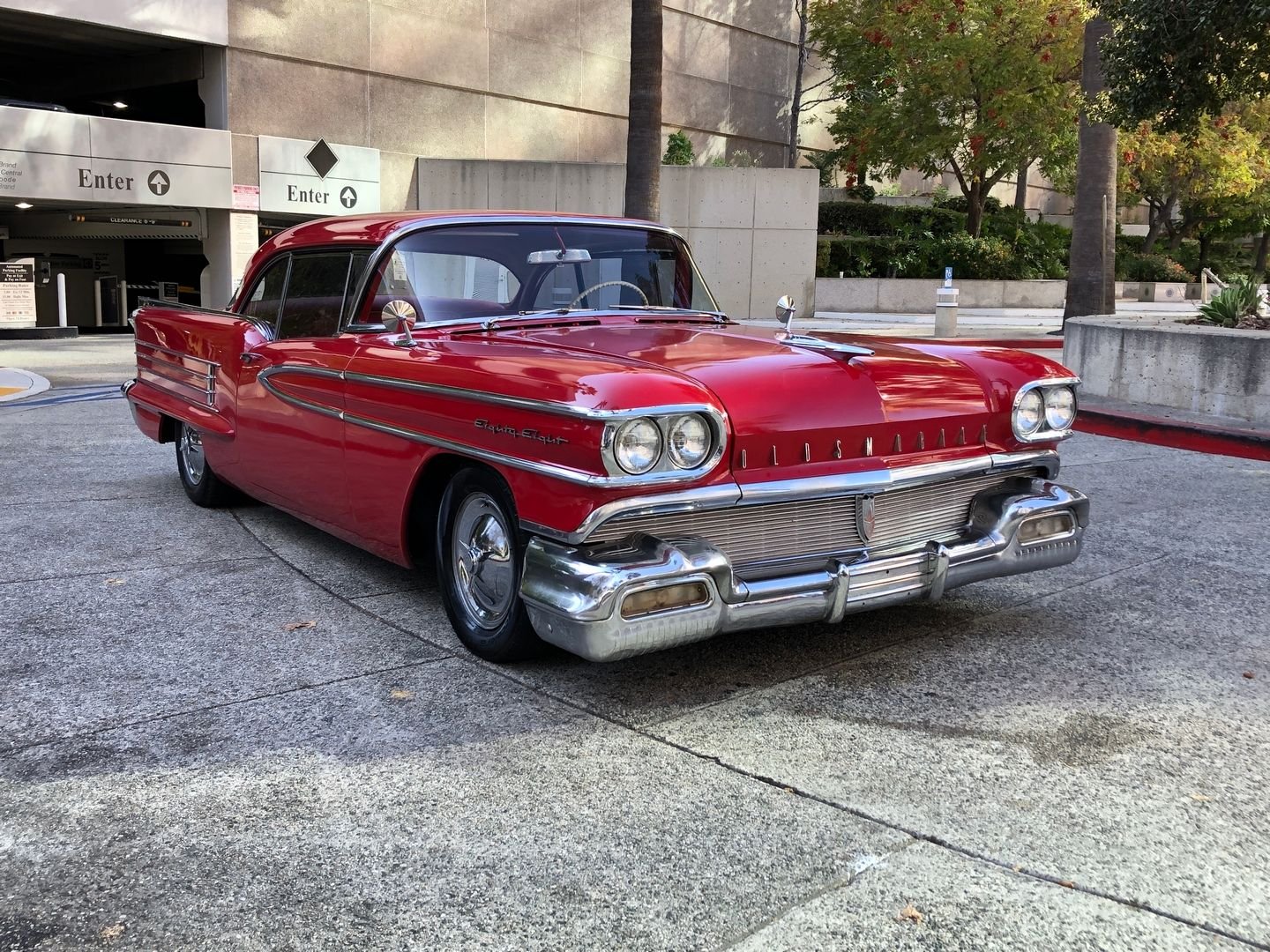 The Oldsmobile 88 (marketed from 1989 on as the Eighty Eight) is a full-size car that was sold and produced by Oldsmobile from 1949 until 1999. From 1950 to 1974, the 88 was the division's top-selling line, particularly the entry level models such as the 88 and Dynamic 88. The 88 series was also an image leader for Oldsmobile, particularly in the early years (1949–51), when it was one of the best performing automobiles, thanks to its relatively small size, light weight, and advanced overhead-valve high-compression V8 engine. This engine, originally designed for the larger C-bodied and more luxurious 98 series, also replaced the straight-8 on the smaller B-bodied 78. With the large, high performance V8, the Oldsmobile 88 is considered by some to be the first muscle car, although this title is disputed.

For 1957 only, the basic 88 was officially named Golden Rocket 88, taken from Oldsmobile's 1956 Motorama two-passenger show car. However, the only badging was an "88" underneath each taillight. Also for 1957 the "J2" option was offered, with three 2-barrel (0.32 m3) carburetors, similar to the Pontiac Tri-Power. The Super 88 continued as the upscale mid-line series. Under the hood, the Rocket V8 increased in displacement to 371 cubic inches and 277 horsepower (207 kW) for all models across the board. Although rare, three speed manual transmissions were still available. Styling highlights were more evolutional than radical overall with three-piece rear window styling utilized on some models. Oldsmobile revived station wagons for the first time since 1950 with the Super 88 Fiesta being a four-door hardtop design. In 1957, Oldsmobile added a safety deep-recessed steering wheel.

For 1958, GM was promoting their fiftieth year of production, and introduced Anniversary models for each brand; Cadillac, Buick, Oldsmobile, Pontiac, and Chevrolet. The 1958 models shared a common appearance on the top models for each brand; Cadillac Eldorado Seville, Buick Roadmaster Riviera, Oldsmobile Holiday 88, Pontiac Bonneville Catalina, and the all-new Chevrolet Bel-Air Impala.

The 1958 model is best known in Oldsmobile as the year of the "ChromeMobile" thanks to tremendous splatterings of chrome trim on the body, particularly on the higher-priced Super 88 and Ninety-Eight models. The styling was advertised by Olds as the "Mobile Look." The Dynamic 88 debuted in 1958 and lasted through 1966 positioned as the entry level model below the Super 88. This model featured a more economical Rocket V8 than its more expensive linemates – a de-tuned 265 hp (198 kW) version of the 371 cubic-inch Rocket V8 with two-barrel carburation. Super 88 models were powered by a four-barrel 300 hp (220 kW) version of that engine as standard equipment with a J-2 option featuring three two-barrel carburetors and 310 hp (231 kW). A new option for 1958 was a "Trans-Portable" radio that could be removed from the instrument panel through the glove compartment and used as a portable radio for beaches, picnics, etc. thanks to portable batteries. A revised instrument panel was highlighted by a new deep-dish steering wheel with "horn bars" replacing the long-standing horn ring still common during that period.

Despite an economic recession that cut into new car sales industry wide, and especially affected the medium-priced car market that Olds competed in, Oldsmobile saw only a slight decline in sales for 1958 and even rose in industry standings to fourth-place behind the "Low-Priced Three" of Chevrolet, Ford and Plymouth, while surpassing a now-floundering sister division Buick on the sales charts for the first time in many years. Oldsmobile was also way ahead of other middle-priced competitors such as sister division Pontiac, Mercury, Dodge and Chrysler, along with Ford Motor Company's all-new and ill-fated Edsel, and Chrysler Corporation's DeSoto - the latter two nameplates of which would fade into oblivion within the next three years.