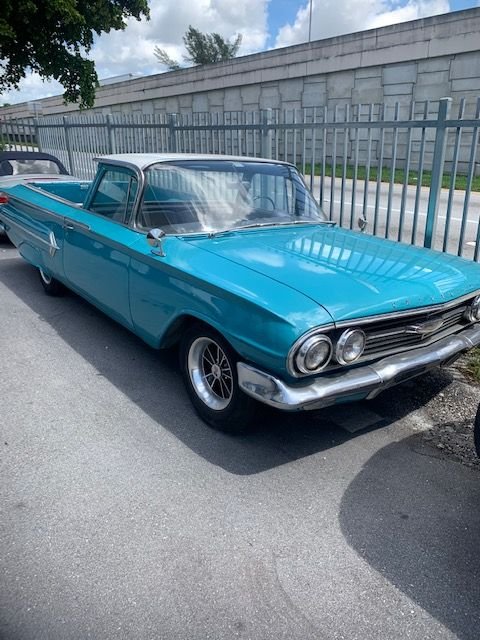 THIS 1960 CHEVROLET EL CAMINO IS LOCATED IN: MIAMI, FL

The El Camino was introduced for the 1959 model year two years after the Ford Ranchero. According to Chevrolet stylist Chuck Jordan, GM Harley Earl had suggested a coupé pickup in 1952.

Like the Ranchero, it was based on an existing and modified platform, the new-for-1959 Brookwood two-door station wagon, itself based on the completely redesigned, longer, lower and wider full-sized Chevrolet. Highly stylized, it initially sold 50% more briskly than the more conservative Ranchero, some 22,000 to 14,000.

Unlike the Brookwoods wagon and a sedan delivery variant, the El Camino was available with any full-sized Chevrolet drivetrain. It came in a single trim level, its exterior using the mid-level Bel-Air's trim, and the interior of the low-end Biscayne. Its chassis featured Chevrolet's "Safety-Girder" X-frame design and a full-coil suspension, both introduced in the 1958 model year. The 119 in (3,000 mm) wheel-base was 1.5 inches (38 mm) longer, and overall length for all 1959 Chevrolets was up to 210.9 in (5,360 mm). The El Camino's payload rating ranged from 650–1,150 lb (290–520 kg), with gross vehicle weights ranging from 4,400–4,900 lb (2,000–2,200 kg) depending on powertrain and suspension. The somewhat soft passenger car suspension of the base model left the vehicle level without a load, in contrast the Ranchero, where standard 1100-pound rated heavy duty rear springs gave it a distinct rake when empty. The quirky Level Air suspension option, in its second and final year, was listed as available, but was almost never seen on any Chevrolet model, much less an El Camino. The 1959 El Camino was promoted as the first Chevrolet pickup built with a steel bed floor instead of wood. The floor was a corrugated sheetmetal insert, secured with 26 recessed bolts. Concealed beneath it was the floor pan from the Brookwood two-door wagon, complete with foot wells. Box capacity was almost 33 cubic feet (0.93 m3).

The similar but less flamboyant 1960 model started at $2366 for the six-cylinder model; another $107 for a V8 with the two-barrel 283. At first glance, the exterior once again had a Bel Air look, with that series' bright-metal "jet" appliqué and narrow trailing molding used to accent the rear quarters. Inside, Biscayne/Brookwood appointments also persisted. The seat was now covered in striped-pattern cloth with vinyl facings. Available interior trim shades were once again gray, blue, and green. Floor coverings were in medium-tone vinyl. Mid-1959 powertrain availability was carried over with minimal changes for 1960: The base 283-cid V8 was detuned a bit for fuel economy and was now rated at 170 bhp (127 kW; 172 PS), and the fuel-injected engines were officially gone.

Orders plummeted by a third, to just 14,163, at which point Chevrolet discontinued the model; meanwhile, Ford moved 21,027 Rancheros, which were now based on the brand-new Falcon compact. The pioneering American sedan pickups just did not connect with enough car-buying Americans. Perhaps these early "crossovers" didn't carry enough passengers; in a time when baby-boomer families dominated the market, three across was the best they could offer. Cargo volume was meager compared with pickup trucks. The low-level trim and marketing efforts focused almost exclusively on commercial customers may have inhibited sales, as well.