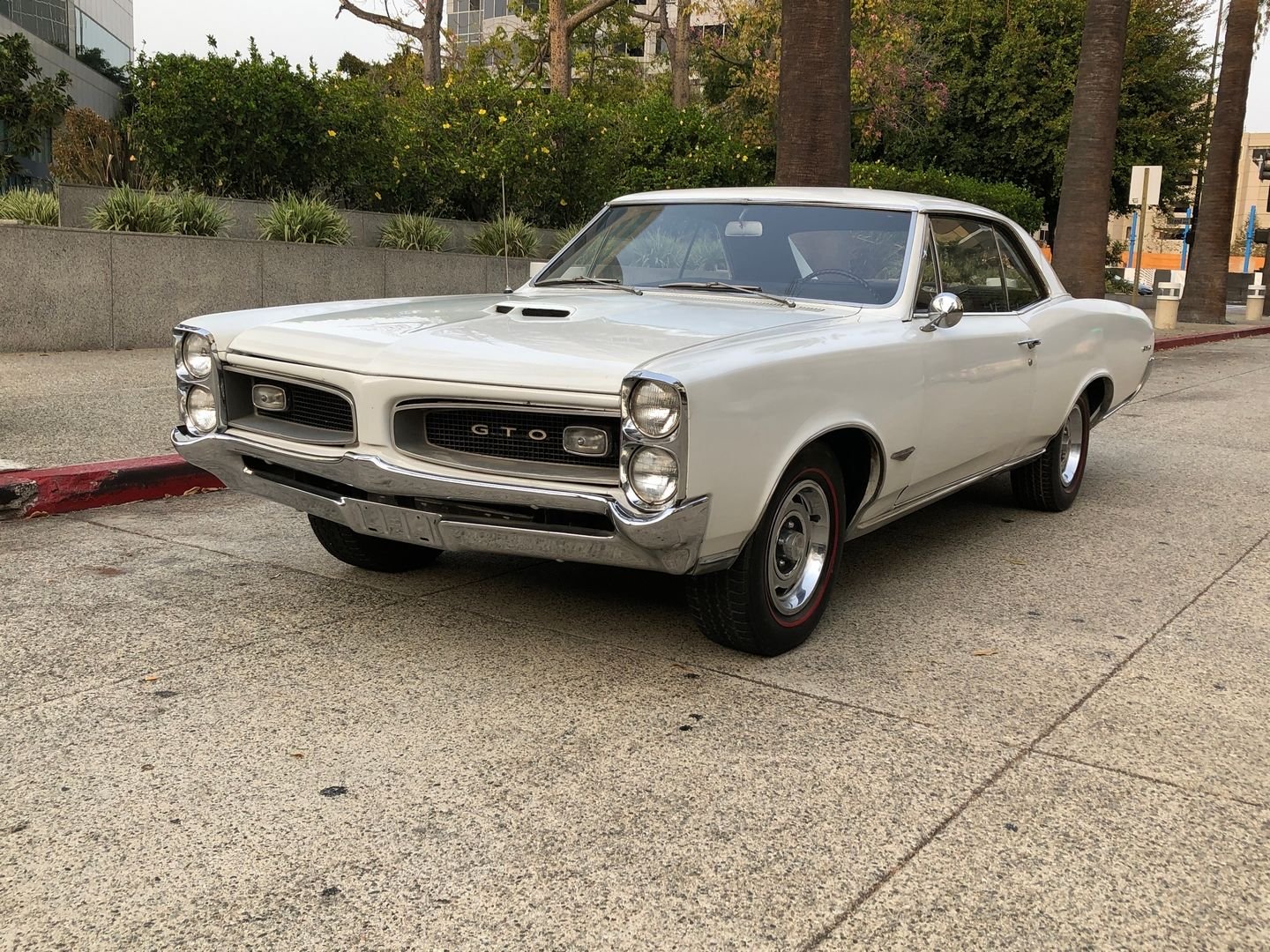 The Pontiac GTO is an automobile that was manufactured by American automaker Pontiac from the 1964 to 1974 model years, and by GM's subsidiary Holden in Australia from the 2004 to 2006 model years.

The first generation of the GTO was the first muscle car produced in the 1960s and the 1970s. The Pontiac GTO is considered by some to have started the trend with all four domestic automakers offering a variety of competing models.

The GTO became a separate Pontiac model (model number 242) in 1966, instead of being an "option package" on the Tempest LeMans. The entire GM "A" body intermediate line was restyled that year, gaining more curvaceous styling with kicked-up rear fender lines for a "Coke-bottle" look, and a slightly "tunneled" backlight. The tail light featured a louvered cover, only seen on the GTO. Overall length grew only fractionally, to 206.4 in (5,243 mm), still on a 115 in (2,921 mm) wheelbase, while width expanded to 74.4 in (1,890 mm). Rear track increased one inch (2.5 cm). Overall weight remained about the same. The GTO was available as a pillared coupe, a hardtop (without B-pillars), and a convertible. Also an automotive industry first, plastic front grilles replaced the pot metal and aluminum versions seen on earlier years. New Strato bucket seats were introduced with higher and thinner seat backs and contoured cushions for added comfort and adjustable headrests were introduced as a new option. The instrument panel was redesigned and more integrated than in previous years with the ignition switch moved from the far left of the dash to the right of the steering wheel. Four pod instruments continued, and the GTO's dash was highlighted by walnut veneer trim.

Sales increased to 96,946, the highest production figure for all GTO years. Although Pontiac had strenuously promoted the GTO in advertising as the "GTO Tiger," it had become known in the youth market as the "goat."

• ORIGINALLY OPTIONED "RIDE & HANDLING" PACKAGE CAR
• CLEAN TITLE
• THIS PONTIAC GTO HAS 47,678 MILES
• 8CYL ENGINE WITH 4 SPEED MANUAL TRANSMISSION
• THE REAR END IS QUITE AT SPEED
• RECENT WORK INCLUDES; FULL TUNE UP, NEW CARBURETOR WITH ELECTRIC CHOKE, NEW HOSES, NEW BATTERY, NEW WATER PUMP, NEW BELTS, NEW ALUMINUM RADIATOR AND NEW MUFFLERS
• ALL OF THE BRAKES ARE NEW AND ARE IN GREAT WORKING ORDER
• NEW SHOCKS ALL THE WAY AROUND AND NEW SPRINGS IN THE REAR
• ALL OF THE TRIM AND MOLDING IS STILL INTACT AND THE BUMPERS ARE IN GREAT SHAPE
• THIS CAR STILL WEARS ITS ORIGINAL FACTORY PAINT COLOR
• VERY ORIGINAL, SOLID AND CLEAN CAR, THE BODY IS IN GREAT SHAPE
• VERY NICE SET OF CLEAN RALLY I WHEELS AND LIKE NEW REDLINE TIRES
• THE INTERIOR IS IN VERY ORIGINAL CONDITION; THE SEATS ARE IN GREAT SHAPE; NEW CARPET, PACKAGE TRAY AND DOOR PANELS
• WELL MAINTAINED, GARAGE KEPT
• RUNS AND DRIVES