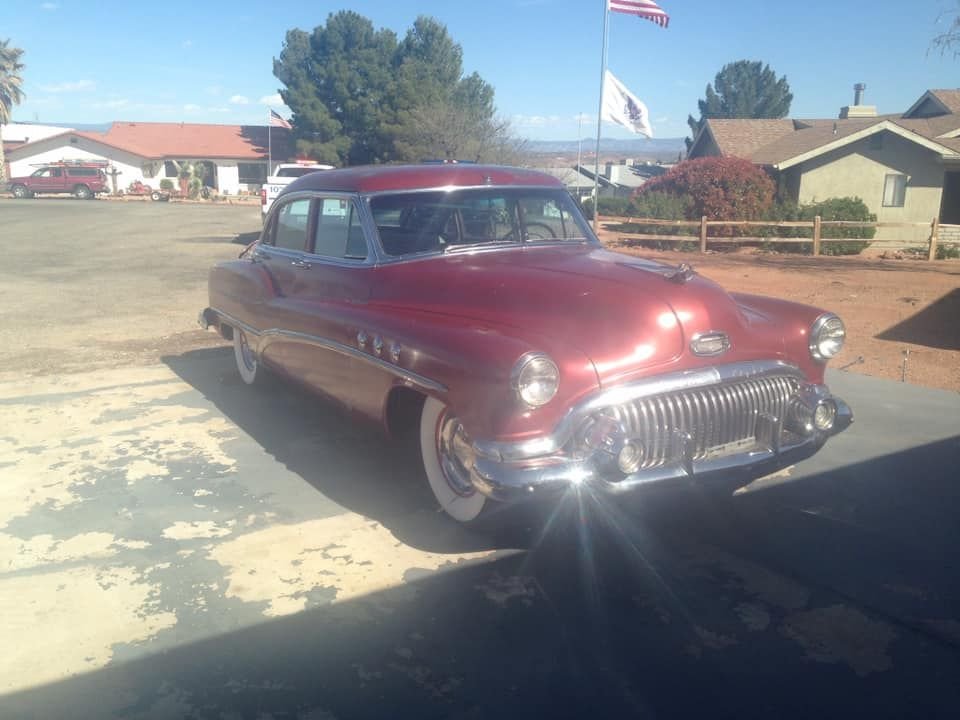 THIS 1951 BUICK RIVIERA IS LOCATED IN: HOUSTON, TX

The Super shared a new General Motors C-body with the Roadmaster but on a shorter wheelbase. It featured three chrome VentiPorts on each front fender to denote its smaller straight-eight engine and shorter engine compartment when compared with the Roadmaster. The sales brochure noted that VentiPorts helped ventilate the engine compartment, and possibly that was true in early 1949, but sometime during the model year they became plugged. The idea for VentiPorts grew out of a modification Buick styling chief Ned Nickles had added to his own 1948 Roadmaster. He had installed four amber lights on each side of his car's hood wired to the distributor so as to flash on and off as each piston fired simulating the flames from the exhaust stack of a fighter airplane. Combined with the bombsight mascot, VentiPorts put the driver at the controls of an imaginary fighter airplane. Upon seeing this, Buick chief Harlow Curtice was so delighted that he ordered that (non-lighting) VentiPorts be installed on all 1949 Buicks.

In 1951 Supers had larger bodies than Specials but looked similar with three rounded VentiPorts per fender, broad bright fender shields and a full length "Sweepspear" chrome body side molding. This chrome-plated strip started above the front wheel, after which it gently curved down nearly to the rocker panel just before the rear wheel, and then curved around the rear wheel in a quarter of a circle to go straight back to the taillight. Series script was found on the deck lid and within the steering wheel center. The long wheelbase sedan was named the Riviera sedan although it was not a hardtop. Supers were trimmed with materials similar to Special Deluxes except for in the plush Super Riviera sedan. Front turn signals were within the bumper guard "bombs," while rear signals shared the stop lamps' housing on the rear fender edges. The convertibles and Estate wagon were trimmed in leather. 169,226 Supers were sold.