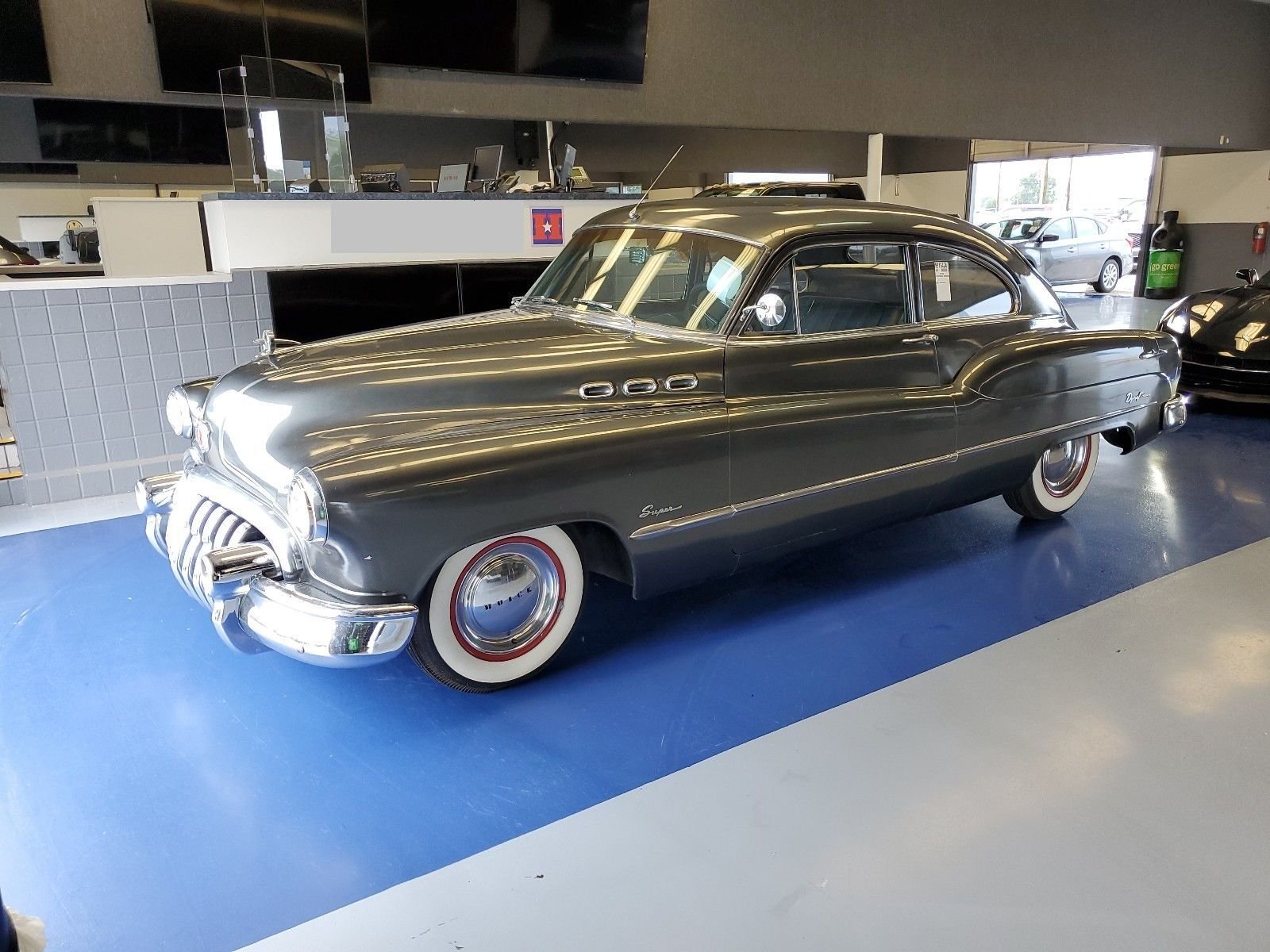 THIS 1950 BUICK DYNAFLOW SUPER IS LOCATED IN: HOUSTON, TX

Super returned as a performance trim level on V8-powered LaCrosse and Lucerne sedans from 2008 until 2011.

The Super shared a new General Motors C-body with the Roadmaster but on a shorter wheelbase. It featured three chrome VentiPorts on each front fender to denote its smaller straight-eight engine and shorter engine compartment when compared with the Roadmaster. The sales brochure noted that VentiPorts helped ventilate the engine compartment, and possibly that was true in early 1949, but sometime during the model year they became plugged. The idea for VentiPorts grew out of a modification Buick styling chief Ned Nickles had added to his own 1948 Roadmaster. He had installed four amber lights on each side of his car's hood wired to the distributor so as to flash on and off as each piston fired simulating the flames from the exhaust stack of a fighter airplane. Combined with the bombsight mascot, VentiPorts put the driver at the controls of an imaginary fighter airplane. Upon seeing this, Buick chief Harlow Curtice was so delighted that he ordered that (non-lighting) VentiPorts be installed on all 1949 Buicks.

Super script was found just above the full length body fender molding on the front fenders. New fender edge taillamps were featured while rear fender skins remained a Buick standard. New fender top parking lamps, harkening back to 1941 styling appeared. Full wheel trim discs were standard along with such features as a cigar lighter, ashtray, and automatic choke. Cloth interiors were standard, except on the convertible which was trimmed in leather and leatherette and had a power top, seat and windows as standard equipment.

Dynaflow automatic transmission was now optional equipment on Supers in 1949. Cars so equipped had 6.9:1 compression ratio and 120 horsepower. Total sales set a record at 190,514 for the first time since the Super's introductory year. The instrument panel was new.

The 1950 Supers shared with all the other series totally new all bumper guard grille and more rounded styling. Super script appeared on front fenders just above the full length lower bodyside moldings. A new body style was a 2-door Riviera hardtop. Another new bodystyle was a long wheelbase sedan which was stretched an extra four inches (102 mm) and featured plusher interior than most Supers, which normally had cloth interiors of finer material than the Special. Supers had three VentiPorts on each hoodside. The convertible had leather power seats plus power windows and top.

The 1950 Super came with a single two-barrel carburetor on a new higher displacement 263 cu in (4.3 L) Fireball I8 which produced 112 hp (84 kW). It was able to achieve speeds over 90 miles per hour (140 km/h) with an optional Dynaflow automatic transmission which, rather than changing through gears, used the torque converter to couple the motor to a single gear ratio. The car had 2 splits in the back glass although the windshield was now curved one-piece glass. Models also could be equipped with an AM radio and an antenna that could be adjusted via a knob in the front center above the windshield. In the June 1953 Popular Mechanics, acceleration was rated at 0-60 mph in 14.5 seconds.[8] The Super set an all time record of 251,883 sold.