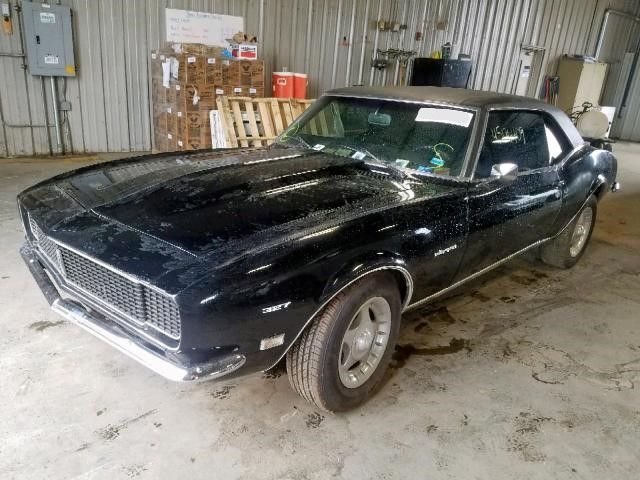 This vehicle is located in:
ELGIN, IL

The first-generation Chevrolet Camaro appeared in Chevrolet dealerships on September 29, 1966 for the 1967 model year on a brand-new rear wheel drive GM F-body platform and was available as a 2-door, 2+2 seat, hardtop (no "B" or center pillar) or convertible, with the choice of either a straight-6 or V8 engine. The first-generation Camaro was built through the 1969 model year.

The RS was an appearance package that included hidden headlights, revised taillights with back-up lights under the rear bumper, RS badging, and exterior bright trim. It was available on any model.

The styling of the 1968 Camaro was very similar to the 1967 design. With the introduction of Astro Ventilation, a fresh-air-inlet system, the side vent windows were deleted. Side marker lights were added on the front and rear fenders which was a government requirement for all 1968 vehicles. It also had a more pointed front grille and divided rear taillights. The front running lights (on non-RS models) were also changed from circular to oval. The big block SS models received chrome hood inserts that imitated velocity stacks and low-gloss black rear tail light panel.