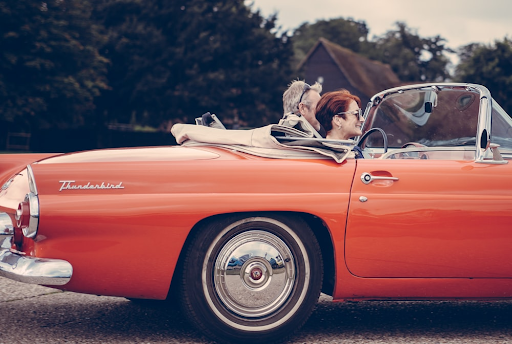 For many people, a car is simply a means of transportation from one point to another. But real automobile lovers think of vintage cars as engineering gems or even pieces of art. Automobile-themed landmarks, festivals, shows, and museums can be found all over the world,  and, sometimes, it is just too hard to decide which ones are worth to be picked. Our team of real classic lovers has compiled a comprehensive list of all the must-see  places to visit if you want to explore rare and gorgeous automobiles, stories and characters that will make you fall in love with vintage cars even more!

The Petersen Automotive Museum is a nonprofit organization focused on automobile history and related educational initiatives. It is one of the world's largest automotive museums not only in the U.S. but also internationally. In the museum's 25 galleries, there are over 100 automobiles on show. The other half is housed in a vault on the basement level of the structure. The ground floor is dedicated to automotive artistry, with an array of lavish automobiles on display. Industrial engineering is the focus of the second level, which includes design, performance, and a range of interactive instructional exhibits. Racing, motorbikes, hot rods, and customs are all shown in special displays on the industrial floor. The third floor is dedicated to the history of the automobile, with a focus on Southern California's car culture. The $40 million Petersen Automotive Museum is owned and maintained by the Petersen Automotive Museum Foundation, which was founded on June 11, 1994, by magazine editor Robert E. Petersen and his wife Margie. The museum was originally situated within the Los Angeles County Natural History Museum, but was later relocated to a historic department store designed by Welton Becket. 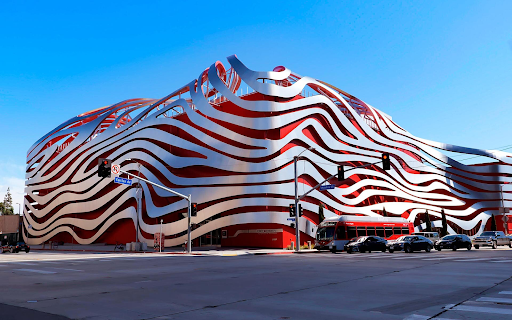 The building was opened in 1962 as a Seibu Department Stores branch in the United States, before becoming an Ohrbach's department store from 1965 to 1986. Robert Petersen chose the largely windowless site as an excellent space for a museum six years after Ohrbach's closed, allowing objects to be displayed without dangerous direct sunlight exposure. The museum completed a massive $125 million restoration in 2015. The building's façade was remodeled by Kohn Pedersen Fox and now has a stainless-steel ribbon assembly consisting of 100 tons of 14-gauge type 304 steel in 308 pieces, 25 supports, and 140,000 bespoke stainless-steel screws. The Scenic Route's interior areas were designed to support shifting displays. On December 7, 2015, the refurbished museum reopened to the public. Today, the museum features one of the DeLorean time machines from Back to the Future, the 1956 Jaguar XKSS formerly owned by Steve McQueen, the “Lightning” McQueen from Disney Pixar Cars and Cars 2, sumptuous Japanese collections, and many more!

The AACA Museum is not just a transportation museum, but is home to the world's biggest permanent collection of Tucker 48 vehicles. When David Cammack, a Tucker historian and collector, passed away in 2013, the complete collection was presented to the AACA Museum from Cammack's personal collection. In conjunction with the AACA's grand opening in 2003, the Museum of Bus Transportation rented space in the museum's lower level to display their collection of 22 antique buses. The AACA Museum is located in Hershey, Pennsylvania. It's a non-profit organization dedicated to preserving the history of American automobiles. Contrary to what its name suggests, the museum is not linked with the Antique Automobile Club of America.

Over 130 vehicles, buses, motorbikes, and automobile antiques from the 1890s to the 1980s are on display in themed settings at the 71,000 square foot museum. It is a Smithsonian Institution and American Alliance of Museums associate museum. The Cammack Tucker Collection, the world's largest collection of Tucker autos, and the Museum of Bus Transportation Collection are two of the museum's key collections.

The National Association of Automobile Museums awarded the museum the NAAMY Award of Excellence in 2014. AACA Museum, Inc. was founded in 1993 as a public charitable organization with the goal of establishing a museum dedicated to the preservation of all types of classic automobiles. The company purchased 25 acres of land near the national club headquarters in Hershey, Pennsylvania in 1996 to be used as the future museum's site. The building's initial costs were anticipated to be $11 million, and the William J. Cammack Supporting Organization Trust made a multi-million dollar testamentary commitment, as well as three 1947 Tucker Torpedo automobiles, in 2000.The remainder of the funds were raised at the AACA's yearly car events in Hershey, Pennsylvania. The museum debuted on June 26, 2003, with over 70 cars given or lent by members of the club. Rather than displaying its automobiles in long rows, the AACA Museum took an educational approach to their exhibits by including scenery and set designs that corresponded to the time period in which each car was constructed. MSNBC rated the museum one of the 12 car museums in the United States worth a detour in 2013.

The route to modernisation in Alaska a century ago was a dramatic one, and the Fountainhead Antique Auto Museum chronicles it in fascinating detail. The museum, which is located on the grounds of Wedgewood Resort, features dozens of historically significant pre-World War II autos as well as providing tourists with a glimpse into Alaska's rough and fascinating formative years. The museum uses large size historic images and videos to bring the early twentieth century Alaska to life. In the museum, you can find photos of Alaskans adapting their automobiles to get around in the snow, ride on rails, and even cut firewood. Early steam, electric, and hybrid cars, and the first American Midget racers and the first V16-powered engine, are all instances of "alternative" vehicles from the past. There are also some outstanding classics on display at the museum. An 1898 Hay Hotchkiss, a tulip-shaped 1903 Cadillac, the last existing 1920 Argonne, and a 1917 Owen-Magnetic with an electric motor are among the more than 80 automobiles in its rotating collection. The museum even has on loan the 1905 Sheldon Runabout, which was the first built-in Alaska automobile. 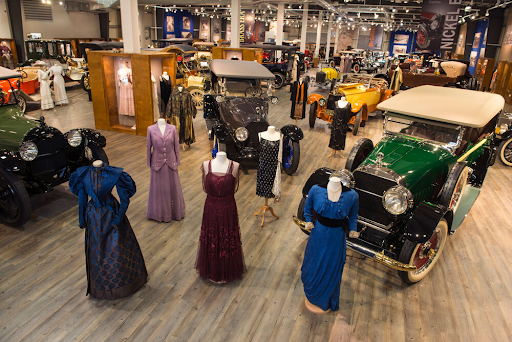 A Vintage Clothing part of the museum highlights how trends have changed over the period of eight decades, as well as how the rise in popularity of automobiles has influenced fashion. More than 130 dresses, suits, shoes, coats, and accessories from eight decades are included in the collection. Imagine yourself in a beaded flapper chemise, a Titanic-era evening gown, or an Edwardian strolling suit. Also, see how Fairbanks' pioneer ladies managed to balance tea-dress fashions with life in mining camps. One of the most fascinating things about Fountainhead Antique Auto Museum is the immersive experience which you can become part of. Put on a duster, hat, and gloves and pose in front of a replica of the original Sourdough Roadhouse, or climb inside a 1911 Everitt and pose with a grizzly bear hide in the exhibit about the historic Valdez-Fairbanks Trail—first Alaska's major transportation artery, which is now the Richardson Highway. All of the museum's autos are still operational, so you can watch and listen as a driver takes one for a roaring spin around the grounds on summer evenings.

The Owls Head Transportation Museum is a charitable organization dedicated to education. Its goal is to collect, preserve, show, and operate pre-1940 airplanes, ground vehicles, engines, and related technology that are important to the evolution of transportation for educational purposes. The Owls Head Transportation Museum (OHTM) houses a world-class functioning collection of over 150 historic automobiles, aircraft, motorcycles, bicycles, engines, and more. With award-winning exhibit halls, community education programs, and a full event season, including Wings & Wheels Spectacular and the New England Auto AuctionTM, the museum in gorgeous Midcoast Maine has something for everyone. The museum, which opened in 1974, is a location where machines from the past are honored via conservation, preservation, and demonstration. The OHTM collection, unlike many museums, is mostly functioning, providing visitors with a beautiful and unique experience during a variety of outdoor events throughout the year. The care and upkeep of these ancient vehicles and planes necessitates a small but great staff as well as a large, dedicated volunteer force. 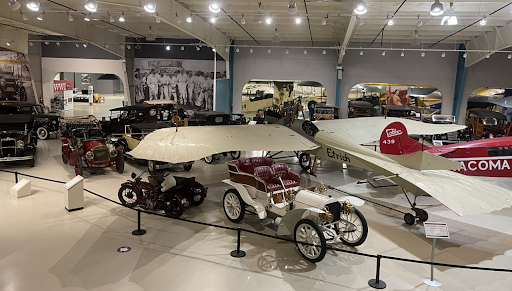 A handwritten note on the backside of a graduation program was the beginning of the museum. According to OHTM’s official website, It was sent to Jim Rockefeller, who owned a grass airstrip in Camden on the slope of a mountain. Tom Watson, who had his own grass strip close to his North Haven Island summer home in view of the Camden Hills, sent the letter. They had previously met because of their shared interest in aviation. "Wouldn't it be nice to have some old airplanes flying around Owls Head." the handwritten message stated. At the end of the message, there was no question mark. Tom was the CEO of IBM, yet he never used a question mark. This tiny gesture sparked a much larger scheme. Jim, a boat and airplane builder, asked his friend Steve Lang if he would want to assist Watson spend some seed money if a place to fly antique planes at the Rockland Airport could be found, and if the flying could be funded in some way by the town. Tom relished the opportunity to mix business and pleasure. The term "museum" was used as a justification for flying vintage planes.

At the time, automobiles were not discussed. The undeveloped area near the end of former Runway 17 was purchased from Knox County as part of a cultural park project. It had been set aside for an industrial park, which did not sit well with the community. To pique interest, Lang and Rockefeller devised the concept of a rally incorporating vintage planes, automobiles, and motors. Wings, wheels, antique motors, and contraptions of all kinds, as well as people from all walks of life, flocked to the first official museum rally in 1975. A Curtiss Pusher from 1912 flew overhead, while a Stanley Steamer passed by, engulfed in vapor. Thousands of tourists attended the first festival of its kind in Maine, which featured high-wheel bicycles, chugging old motors, and hundreds of antique cars. The Museum began to flourish after the inaugural event.

Founded in 1974, the Auburn Cord Duesenberg Automobile Museum was built with the goal of preserving the Auburn Automobile, Cord Automobile, and Duesenberg Motors Company automobiles. The museum is situated in the former administration building of the Auburn Automobile Company in Auburn, Indiana, which was headquartered in this location from the early 1900s until 1937. In 2005, the building was designated as a National Historic Landmark, together with the adjacent service and new parts building and the L-29 building, which is now home to the National Auto & Truck Museum. This facility was named one of the best-preserved examples of an independent auto company's facilities in the United States. The showroom and administrative buildings were designed in the Art Deco style by architect Alvin M. Strauss and constructed in 1930. The Auburn Automobile Company began as a carriage manufacturing company, and at its peak, it occupied over 18 acres (7.3 ha) of land in Auburn. Until 1960, the administrative building was home to a firm that sold original and reproduction components for a variety of obsolete manufacturers, including the Auburn, Cord, and Duesenberg nameplates. For more information, we highly recommend you to visit the site and experience everything yourself! 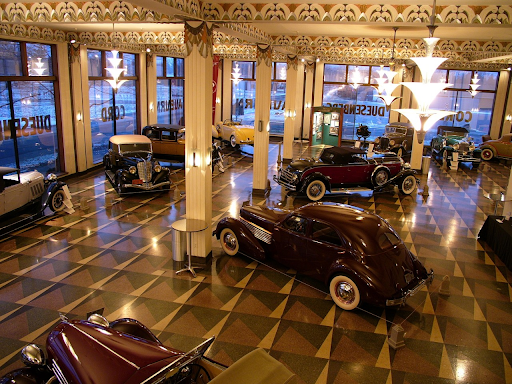 Even though we picked the best physical destinations for classic car enthusiasts, we acknowledge that many people don’t have the opportunity or the willingness to travel and to visit classic car museums physically. To those who fit in this category (and even to those for whom the above-mentioned list is not enough), we highly recommend to visit our sumptuous website of Vintage Car Collector, which, although not a museum, features an astonishing collection of vintage gems and will definitely be an enjoyable and memorable destination for classic car enthusiasts. Be it physical or virtual, enjoy your journey through time!