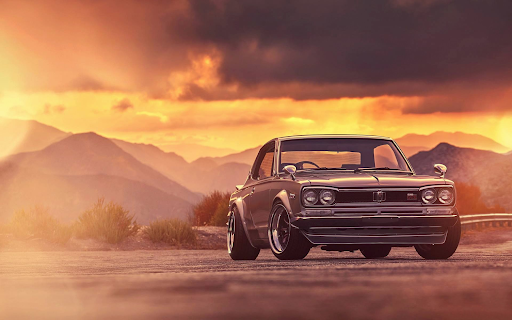 The Nissan R32 Skyline GT-R is often considered to be a one-of-a-kind JDM classic, and this is true even despite the existence of the better performing and improved R33 model. But the R32 isn't the first car to be called a 'Skyline GT-R.' As explained by MotorBiscuit, that would be the early 1970s 'Hakosuka' model. But between that car and the R32, there was another Skyline, the 'Kenmeri' Nissan Skyline GT-R, which is generally overlooked today. According to Hagerty, the first Nissan Skyline GT-R wasn't initially a Nissan. The model began as the Prince Skyline, which competed in the Japanese Grand Prix in the 1960s against Porsches. With the mid-engine R380, it eventually won the 1966 race, impressing Nissan so much that it bought Prince altogether. The Nissan Skyline 2000GT-R sedan was born exactly from this automobile in 1969. According to Car and Driver, it was later available as a coupe and was given the internal number KPGC10.

The term 'Hakosuka' is a combination of hako ('boxy') and sukairain, the Japanese pronunciation of 'Skyline.' The Nissan Skyline GT-R 'Hakosuka' was a sporty car with actual racing technology at the time. According to Evo, it boasts a 2.0-liter straight-6 engine based on the R380's engine that produces 158 horsepower and 131 pound-feet of torque. Petrolicious says that it revs to 7000 RPM, giving power to the rear wheels. As a result, Hagerty writes that the racing version was tremendously successful, winning 52 races in its first three years. As a result, Nissan decided to make a sequel. The 1973 C110 Nissan Skyline GT-R, often known as the 'Kenmeri' variant, was the followup. According to Road & Track, the name comes from a series of commercials created to promote it. According to Hemmings, the ads depicted a Western-looking couple named Ken and Mary. As a result, the name 'Kenmeri' was coined. The C110 Nissan Skyline GT-R is a bit more luxurious than the previous model. And, according to Hemmings, its styling is more influenced by American tastes. That's because Nissan was rumored to be considering selling the C110 model in the United States. And, based on its specifications, it would have performed admirably. 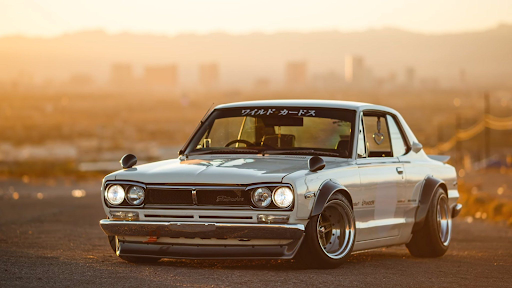 The Race Car Which Was Never Raced

The 'Kenmeri' Nissan Skyline GT-R, like the older Hakosuka, has a 2.0-liter straight-6 engine, according to BH Auction. It's the same S20 engine, with the same horsepower and torque figures. The C110 sports a 5-speed manual transmission and a limited-slip differential, just like the Hakosuka. Silodrome also mentions a four-wheel, fully independent suspension system. While the engine was not improved, the rest of the vehicle was. According to Car and Driver, the C110 Nissan Skyline GT-R was the first Japanese-market car to include four-wheel disc brakes. It also debuted the quad tail lights, which have since become a GT-R signature feature. Plus, while the GT-R variant was only available as a coupe and not as a sedan or wagon like the other C110 versions, it had optional air conditioning, according to CarThrottle.According to Hagerty, the original Hakosuka is still an impressive automobile to drive. It's fast not because it's rapid, but because it's visceral. According to Forbes, the S20 engine rasps and roars, and the steering, while not accurate, provides a lot of feel. And, according to Evo, it corners smoothly with little body roll. Unfortunately, evaluating the Kenmeri Nissan Skyline GT-virtues R's is tough. That's because, while sharing many of the Hakosuka's mechanicals, it was never raced. Nissan's racing program was halted, and many of its high-performance cars, including the GT-R, were axed due to emissions laws, according to Autoblog. That's why the difference between the C110 and the R32 is so great. Because of these restrictions, the Kenmeri Nissan Skyline GT-R is one of the most sought-after Skyline cars, even when limited-edition trims are excluded. The C110 was produced until 1977, however the Kenmeri Skyline GT-R was only produced in 1973. Only 197 were produced by the business. As a result, even when compared to Hakosukas, C110 GT-Rs are extremely valuable and scarce.

The Next Chapter of the Skyline(s)

The subsequent skyline, the amazing R33, was another success for the company. The shape of this exotic vehicle from the first Gran Turismo game may be familiar to Gran Turismo fans. Since then, it's been recreated in every episode of the racing franchise. However, unlike the fantasy realm of pixels, where several copies can appear and coexist, there is only one actual physical copy in real life. The R33 LM was born out of the changing landscape of endurance racing in the early 1990s. With the large-winged, high-performing prototypes in the late 1980s, Nissan took on endurance racing with two feet. The R87E, R88C, and R89CK were among them, while Mark Blundell's R90Ck set a pole-worthy quali lap at the 1990 Le Mans 24 Hours. However, in the early 1990s, the regulation was rewritten, thus killing Nissan's Group C programs and rendering them outdated by 1994. 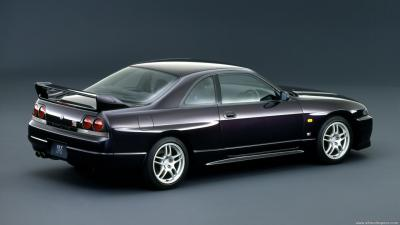 Whereas most other automakers withdrew to save money, Nissan went back to the drawing board and began building a completely new car with Nismo, its go-faster subsidiary.

Prototype races were almost entirely phased out by new regulations, which favored production-based GT cars. With this in mind, Nissan chose the current iteration of the victorious Skyline GT-R as the foundation for its new 'GT1' racing car. The legendary R32 Calsonic Skyline dominated all of its rivals, winning 29 races from 29 attempts over 4 seasons, earning the moniker 'Godzilla.' Nissan would race its R33 successor in the next, functionally better but less famous episode. The famed RB26DETT engine was tweaked to Group N spec (aka 400bhp) and the R33 LM race car was stripped to 1150kg, with front drive shafts pilfered to make it an RWD. It also included a massive body kit designed to boost aerodynamics, conditioning, and gripping. However, the R33 LM had to be homologated before it could compete at Le Mans in 1995. The singular road-going version was required to make this possible, and the puffy-cheeked silver creature was the end outcome. 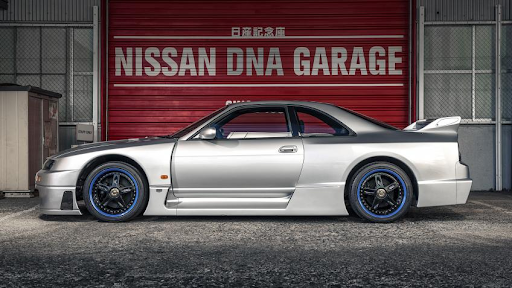 According to TopGear, the LM is registered in the United Kingdom, but it is only infrequently used. and Instead, it is kept in the DNA garage, as if in captivity, and a large number of white-gloved gentlemen take care of it to ensure no damage and proper maintenance (if you would like to learn more about best maintenance tips and strategies, you can read our article full of useful advice on how to properly store and maintain your vintage car). In real life (i.e. not in the pictures), from an up-close look, the R33 has more power and ferocity than one could ever expect. The arches are 50mm larger at all four corners than the ordinary car, and it features a gaping gob, a dropped chin, and scalloped bonnet vents, all of which add to the drama. The undercarriage is equally as attenuated as the tires. Regrettably, the meant-for-tournaments, extrmelely powerful RB26DETT straight-six has been detuned to 300bhp rather than full 400bhp. Meanwhile, the interior is essentially identical to that of a standard R33. Just a Nismo racing steering wheel in Alcantara and hip-hugging checker-board seats… It also has a rather odd design, with a pumped ground clearance and its tiny wheels having a hard time to match and keep up with the huge, boxlike arches (but classic cars come with all kinds of looks and designs, providing them with utterly unique personas that you can explore in our diverse inventory). After obtaining homologation, two R33 LM race cars invaded France in 1995 to compete in the Le Mans 24 Hours. The GT-R, on the other hand, battled against behemoths like the McLaren F1 and Ferrari F40. Despite its comeback in 1996 with a more sophisticated, better functioning, highly competitive R33, the GT1 program was canceled a year early due to the Porsche 911 GT1's brutal pace. Nonetheless, the Nissan GT-R Skyline R33 LM road vehicle is a holy diamond in Nissan's motorsport crown. It's a big-bodied beast that's far too valuable to be let loose.