The Failure of the Mt. Hood Aerial Skiway 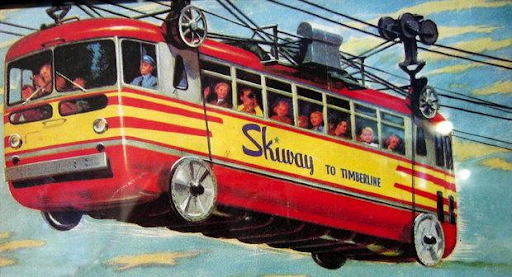 Every winter, thousands of skiers flock to Mt. Hood to enjoy the snow. While most winter sports fans today drive and ride lifts to their destinations, the Mt. Hood Skiway aerial tram provided another option for getting from Government Camp to Timberline Lodge following WWII. The tram's developers had great hopes for the vehicle's success, as it was half ski lift and part flying bus. The Mt. Hood Skiway tram made its inaugural ascent from below Government Camp to Timberline Lodge in January 1951. On its preview voyage, it was the world's longest of its kind, attracting the attention of newspapers, popular magazines, and newsreel producers. Despite all of the enthusiasm, the tram was operational for only five years.

The newly founded Mt. Hood Aerial Transportation Company held its first meeting at the American Bank Building in Portland on October 24, 1947. Dr. J. Otto George and A.L. Greenwalt were the only stockholders at the time, each holding 250 shares. George founded the enterprise with the goal of building a cutting-edge aerial tramway that would connect Government Camp and Timberline LodgeAfter a lengthy and expensive construction procedure, the "Skiway" made its debut public run in January 1951. Richard Neuberger described the Skiway as the "most extraordinary of buses" in an August Popular Science story, scraping clouds to drop passengers down at Timberline Lodge. Despite its fame and great hopes, the tram discontinued operations in 1956 due to declining income. Unlike other shorter, lighter lifts, the Mt. Hood Skiway operated with two adapted city buses, which was not very well-thought-out. The buses, which were outfitted in Portland by Willamette-Pointer, each employed two 185-horsepower gasoline engines to pull the bus up a stationary 1.5-inch diameter rope, similar to how logs are hauled out of the woods. Great photographs of the more than twenty-five miles of cable being brought up the mountain and put along the 3.2-mile line from the lower terminal building to Timberline Lodge may be seen in the Oregon Journal photograph archives stored at the OHS Research Library. 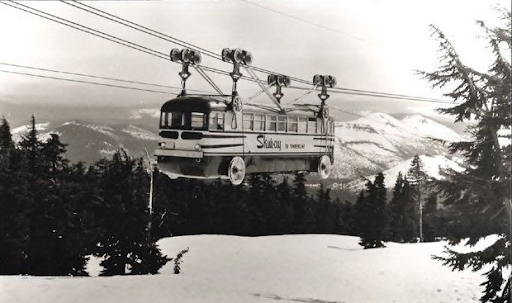 Each bus had a capacity of 36 passengers and included streetcar-style seats that flipped to allow passengers to always face forward. According to the Oregon Historical Society, The custom buses cost $40,000 each, compared to $16,500 for a comparable passenger bus, and consumed seven gallons of fuel every round journey. The buses' enormous weight caused a 25-minute, laborious ride up the mountain until they were eventually placed on the ropes. As a result, each bus could only make one round-trip each hour, moving only 72 people per cabin — a business model that would be unprofitable. The line's convoluted route, which began at a lower terminal building — which housed a restaurant and snack bar — below Government Camp and cut a clear path to the west side of Timberline Lodge, cut into profitability. In 1948, the business engaged Forest Service veteran Volley Reed to lead two cutting crews that worked from opposite ends of the path, with the intention of meeting in the middle — Reed later changed the plan after it was revealed that the crews were not cutting a straight line. After the crews finished two years later, work on constructing 38 steel towers to support the tram's kilometers of cable began. 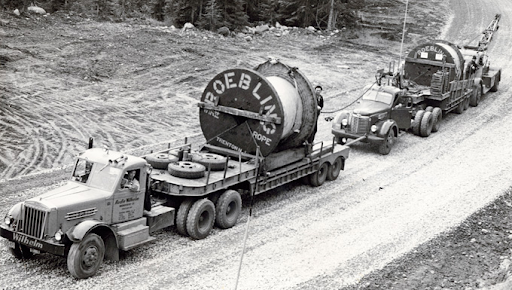 The Skiway tram was crowded for its debut run on January 2, 1951, despite considerable snowfall. Representatives from various local news outlets were there. The bus was dragged up to one side of a tower then coasted down to a low point before climbing to the next. The Skiway was even seen in motion on newsreel video from the time. "The tramway crippled its way through five years of marginal operations before suspending" in 1956, according to Bill Keil, a Timberline Lodge publicity manager in the 1950s. The Mt. Hood Aerial Transportation Co. collection (OHS Research Library Coll 146) contains corporate records that reveal how the firm attempted to save the failed operation. Shareholders gathered several times between 1956 and 1958 to discuss the company's future. They considered a revamp employing a moveable cable system with 30 to 40 cars instead of two buses during a conference on August 9, 1957. However, at the same meeting, shareholders raised their reservations about further spending. The skiing between Timberline Lodge and the lower terminal was deemed insufficient to warrant a standard ski-lift system, and the majority of their usage occurred during the summer months. 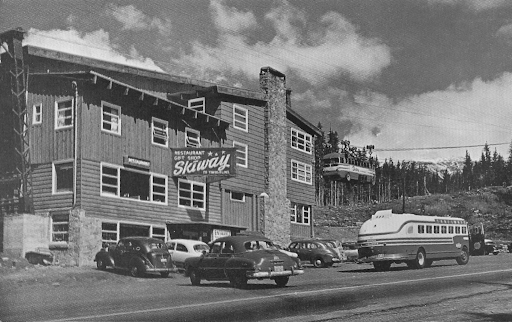 Another issue, according to long-serving board member George Rauch, was "a fine highway that competes bitterly with us." He mentioned the following difficulties with the Skiway at the same August 9 meeting: “I’ve ridden the tramway. I’ve listened to the shrieks and I’ve taken the jolts over those, what you call them — the saddles, and I’ve heard what people say. Now, perhaps some of those things could be eliminated. In my opinion, having fifty years’ experience with business organizations, this first was improperly conceived because it was put on us — an effort to make an experiment to prove to the world that the Roebling Company could haul people as well as they do logs. Therefore, it’s improperly constructed mechanically.”

Despite these debates, efforts to save the Skiway tram continued throughout the rest of 1958 and into the following year. Despite repeated attempts to conduct tests for a redesign, a Liquidating Committee was created by June 1959. The lower terminal structure was sold to investor William Simon for $25,000 a year later, in 1960. Zidell Machinery & Supply Company paid $10,080 for the two buses, a jeep, an engine, and other tram parts in December 1960. The Skiway tram's route, which runs upward between Government Camp and Timberline Lodge, may still be seen today. On Government Camp Loop, the original lower terminal structure is now Thunderhead Lodge. The Glade Trail and the Skiway Trail are still used by skiers to get downhill from Timberline Lodge. Even though the project failed, the fascinating story of its ideation and design still remains, striking us by its ingenuity and uniqueness even today. If you, like a true classic enthusiast, are fond of such stories that reveal the secret pages of the history of classic vehicles, concepts and designs, you are more than welcome to check out our car library that will never stop surprising you with its rich variety of cool stories, told in meticulous detail!