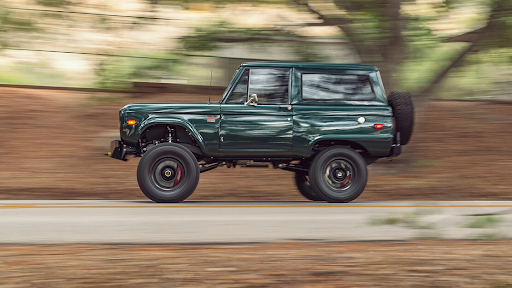 Ford never stops surprising its beloved customers with astounding designs and revolutionary decisions. The Ford BR is an integral and indispensable part of the list of America's most recognizable and beloved SUVs. Americans and people from all other corners of the world fell in love with this extraordinary SUV immediately and unequivocally, from the very first days of its groundbreaking premiere in the 1960s through its comeback in 2020. But the story of the BR becoming one of the most well-known automobiles in the world is as astonishing as the vehicle! In 1966, when Ford first released the Bronco, the vehicle became an overnight success. One of the features that Americans craved at that time was the capacity to go off-roading - an ambition only a few cars were able to fulfill. Ford found itself at the right place at the right time, understanding the needs of its customers and developing the Bronco as a response to the high demand for adventure and flexibility. When compared to other cars of the time, these early Broncos were plain, minimalist, and straightforward, but that's exactly what consumers needed and desired. 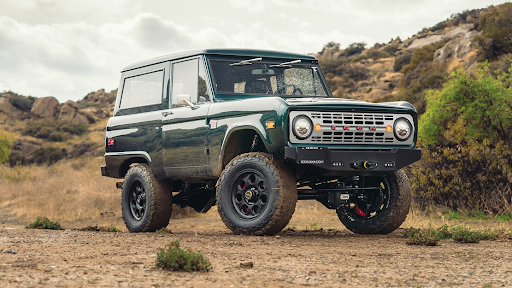 The original generation of Broncos, which ran between 1966 and 1977, came in three different configurations: hardtop, pickup truck, and convertible. Regardless of which configuration a driver chose, the Bronco provided them with a four-wheel-drive vehicle capable of handling practically any topography. The next wave of the Bronco, which barely lasted a year between from 1978 to 1979, cemented the intricate design of the Bronco in the very depths of the hearts of Americans. From this point on, Ford started supplying Broncos with  removable hardtops solely. The famous rear-window that descended into a door and which then became one of the distinguishing features of the Bronco debuted in this version.

Nevertheless, between 1980 and 1996, the Bronco underwent three generations of transformation as American drivers came to the conclusion that the Bronco, and all other huge SUVs, were no longer in their best interests. As a response to this decline in demand,  Ford aimed to make the BR a little more fuel-efficient and operable on standard terrains in the third generation. The third generation is also when Ford debuted the distinctive Ford logo on their automobiles. Bronco's subsequent 4th generation attempted to make the vehicle more suitable for regular driving instead of merely off-roading. This model received a larger 5.0-liter V8, but Bronco's popularity continued to plummet. The car was simply excessively huge for most clients, especially at the time when Americans were yearning for more compact automobiles.

When designing the fifth and most controversial model of the BR, Ford decided to modernize the car by introducing more security mechanisms and, most notoriously, replacing the detachable hardtop by a rigid, irremovable roof. But along with the technical specularities, there is something else the fifth generation Bronco is most famous for. This is the car that O.J. Simpson tried to flee in, an incident that caught the attention of millions of telespectateurs. 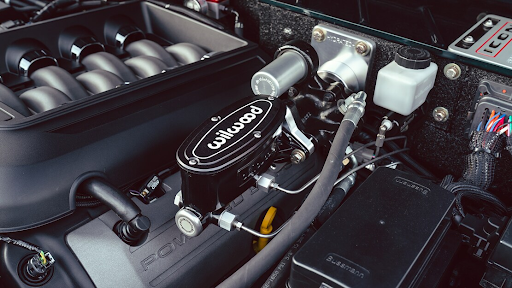 If you are unfamiliar with this sensational story, here is a concise synopsis: O.J. Simpson was previously regarded as one of sports' most popular figures, shattering records with the Buffalo Bills in his early years until retiring in 1979 with his hometown San Francisco 49ers. But things changed on June 17, 1994. There was a history of abuse against his ex-wife, Nicole Brown, so when she and Ron Goldman, 25, were brutally murdered on June 12, 1994, the police wanted to speak with Simpson about it. But O.J. didn't want to talk, resulting in one of the most bizarre nights in American history. O.J. Simpson was supposed to surrender to authorities by 11:00 a.m. Pacific on June 17, 1994, after becoming a person of interest in the killings of his ex-wife and her friend. But he didn't show up. No one had an idea of where, but  it wasn't long before everyone knew where he was. As a warrant for his arrest had been issued, a TV news chopper spotted a white Ford Bronco on a Los Angeles road at 6:45 p.m., and the pursuit was on. Over 95 million people watched the low-speed chase across Southern California that culminated at Simpson's home in Brentwood over the following few hours. The white BR, operated by Al Cowlings, a longtime friend and teammate of O.J., became almost as renowned as the two individuals inside the car. Cowlings had played football with Simpson starting from high school, then at two universities, all the way to the NFL. During the chase, Cowlings contacted 911, informing authorities that O.J. had a gun to his head and only wanted to go home before being arrested. Cowlings was detained for assisting a fugitive on that famous night, but the charges were eventually dismissed. Cowlings was keen to get rid of the white Bronco after the chase and the ensuing "Trial of the Century." In 2014, he told a friend who worked for a sports agent, Don Kreiss, that he should find a buyer for the white Bronco since he never wanted to drive it again. O.J. Simpson’s former agent, Mike Gilbert called this white Bronco the second-most-viewed automobile in American history, only falling behind the car in which JFK was killed.

This famous and infamous fifth generation Bronco ended up being the last Bronco for decades. Ford abandoned the Bronco in favor of the Ford Explorer, a vehicle which was a tremendous success. However, with recent advancements in the automotive industry and a renewed desire for SUVs, Ford decided to introduce a new, refined Bronco in 2020. 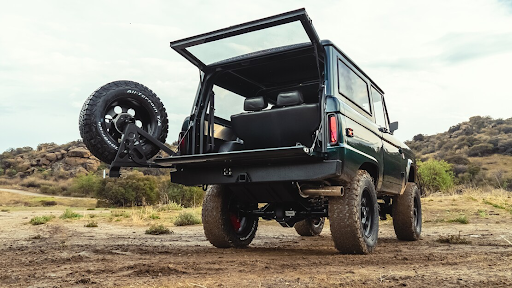 Among vintage car enthusiasts, ICON 4x4 is most renowned for its great FJ Land Cruiser designs. ICON was born out of Toyota Land Cruiser, a leading preservation and restoration firm, but its latest invention pays homage to the original Ford Bronco, an American all-terrain legendary classic. The very first versions of Broncos, which were produced from 1966 to 1977, were Ford's proposed alternative to the flexible CJ Jeep. These vehicles were much smaller in size than what many Australians would expect, thereby providing the drivers with the necessary comfort and controllability on the road. They had a 92-inch (2337mm) wheelbase, which made them look more like a Defender 90 than any of the other models. The initial Bronco was a simple and elegant but also very practical 4x4 built to travel anywhere, similar to other well-established models such as the CJ and Land Rover. Thanks to this brand image of an all-achieving vehicle as well as its stunning design, the Bronco soon became one of the most popular and beloved cars in the United States. Inspired by this popularity of the original, the ICON Bronco has been remanufactured to have all of the conveniences and dependability of a modern vehicle while keeping the vintage look and small size of the initial classic, resulting in a unique model that all vintage car lovers fall in love with. The ICON BR employs an authentic Ford body that has been disassembled and repaired, as opposed to the ICON FJ vehicles that feature a completely new and freshly produced body. While some Broncos are simply impossible to save, some others are so well preserved that they allow a  classic restoration. A clean, gleaming, decent body is the most important prerequisite for an ICON, as virtually all the other parts are discarded. 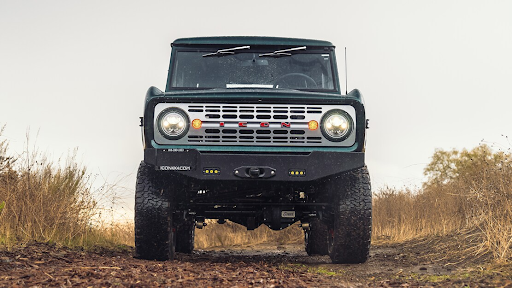 The initial collectors edition Ford chassis is upgraded with one manufactured by chassis specialist Art Morrison out of 2"x4"x0.180" mandrel-bent tubing and laser cut mounts. The redesigned chassis features a more modern design with larger rails for increased rigorousness and improved weight balance, which improves the vehicle's dynamic performance and overall agility to a remarkable extent. Front and rear Dynatrac axles with Superior 36-spline axles and 4.56:1 geared ARB Air Lockers are employed, with a high-pinion Dana 60 at the back and a Dana 44 at the front. With six-piston front and four-piston rear calipers and large 405mm brake rotors, this vehicle is endowed with the groundbreaking Sport Brake Package.

A fully customized four-link structure with Fox coil-overs, Eibach springs, and Hotchkis sway bars connects the diffs to the chassis. The trailing arms feature 'Johnny joints,' which are smoother and gentler than heim joints while still allowing for the same level of movement and great articulation, offering this apparatus a total of 300mm of travel at either end. 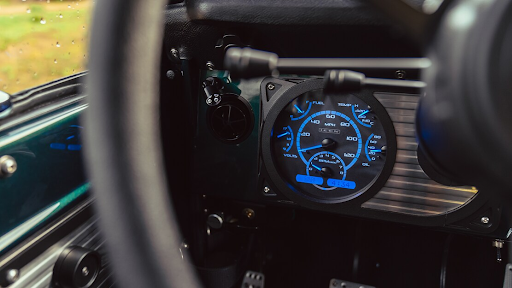 Pro Comp alloys with 285/75R17 BFG All Terrains are mounted on this BR. The ICON specialties are equipped with contemporary powertrains, and the Bronco offers a new 5-litre Coyote V8 engine with a horsepower that exceeds 410hp, a level of power you would expect from a 2014 Mustang. The car also makes use of a 4R75W automatic transmission with increased switching pressure for more powerful gear shifts. Based on the owner's preferences , a five-speed manual transmission is also provided. An Atlas II transmission case with 3:1 low-range gears is controlled by the dual transfer sticks. As an alternative, a super low 5:1 gearing is also offered. To sort out any potential problem, you can use the twin sticks to configure rear, front, or lockable 4-wheel drive. Then, the power is sent to the Dynatrac axles and BFG tires through custom driveshafts. Although the car runs on authentic, repaired Ford sheetmetal, the body is where the myriad of embellishments that distinguish ICON may be found. The grille, for instance, is laser-cut stainless steel, while the side mirrors, fuel filler, door handles, and lamp surrounds are all billet-machined. LED headlamps and LED illumination are used in the overall design of the vehicle. The upgraded Ford motor wiring is integrated with a custom-made wire loom. A circuit box and contemporary, waterproof connectors are provided, while the dash incorporates Dakota Digital instruments for maximum optimization and astonishing design. It's all meant to make driving a new 4x4 as smooth, straightforward, and dependable as possible. 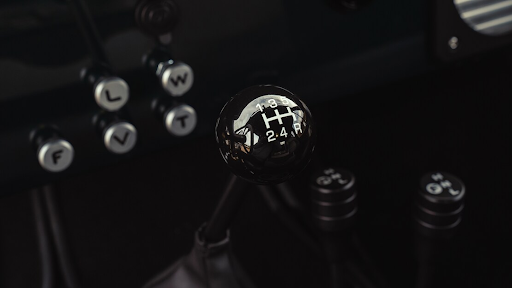 Many of the classics created in the past were so well-thought-out and meticulously designed that, even in the presence of astonishing and powerful modern vehicles, manufacturers still resort to the previous classic designs, in an attempt to give new life to the imperishable beauties of the old vintage gems and designing a present that is more of a reincarnation and reverberation of the past. So it is more than likely that our mesmerizing classics will soon become the source of inspiration for the most trending designs of the future, and that investing in a classic car today you are investing in the most groundbreaking legends of tomorrow!